k-means clustering is a method of vector quantization, originally from signal processing, that is popular for cluster analysis in data mining. k-means clustering aims to partition n observations into k clusters in which each observation belongs to the cluster with the nearest mean, serving as a prototype of the cluster. This results in a partitioning of the data space into Voronoi cells.

The problem is computationally difficult (NP-hard); however, there are efficient heuristic algorithms that are commonly employed and converge quickly to a local optimum. These are usually similar to the expectation-maximization algorithm for mixtures of Gaussian distributions via an iterative refinement approach employed by both k-means and Gaussian mixture modeling. Additionally, they both use cluster centers to model the data; however, k-means clustering tends to find clusters of comparable spatial extent, while the expectation-maximization mechanism allows clusters to have different shapes.

The most common algorithm uses an iterative refinement technique. Due to its ubiquity it is often called the k-means algorithm; it is also referred to as Lloyd`s algorithm, particularly in the computer science community.

Given an initial set of means (see below), the algorithm proceeds by alternating between two steps:

Assignment step: Assign each observation to the cluster whose mean has the least squared Euclidean distance, this is intuitively the "nearest" mean.(Mathematically, this means partitioning the observations according to the Voronoi diagram generated by the means).

where each is assigned to exactly one , even if it could be assigned to two or more of them.

Update step: Calculate the new means to be the centroids of the observations in the new clusters.

The algorithm has converged when the assignments no longer change. There is no guarantee that the optimum is found using this algorithm.

The algorithm is often presented as assigning objects to the nearest cluster by distance. Using a different distance function other than (squared) Euclidean distance may stop the algorithm from converging. Various modifications of k-means such as spherical k-means and k-medoids have been proposed to allow using other distance measures.

Demonstration of the standart algorithm 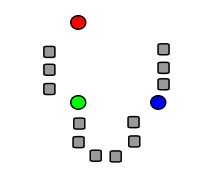 1. k initial "means" (in this case k=3) are randomly generated within the data domain (shown in color). 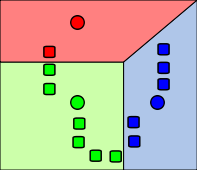 2. k clusters are created by associating every observation with the nearest mean. The partitions here represent the Voronoi diagram generated by the means. 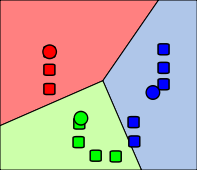 3.  The centroid of each of the k clusters becomes the new mean.

4. Steps 2 and 3 are repeated until convergence has been reached.