Warning: This implementation is not intended for large-scale applications. In particular, scikit-learn offers no GPU support. For much faster, GPU-based implementations, as well as frameworks offering much more flexibility to build deep learning architectures.

Multi-layer Perceptron (MLP) is a supervised learning algorithm that learns a function by training on a dataset, where is the number of dimensions for input and is the number of dimensions for output. Given a set of features and a target , it can learn a non-linear function approximator for either classification or regression. It is different from logistic regression, in that between the input and the output layer, there can be one or more non-linear layers, called hidden layers. Figure 1 shows a one hidden layer MLP with scalar output. 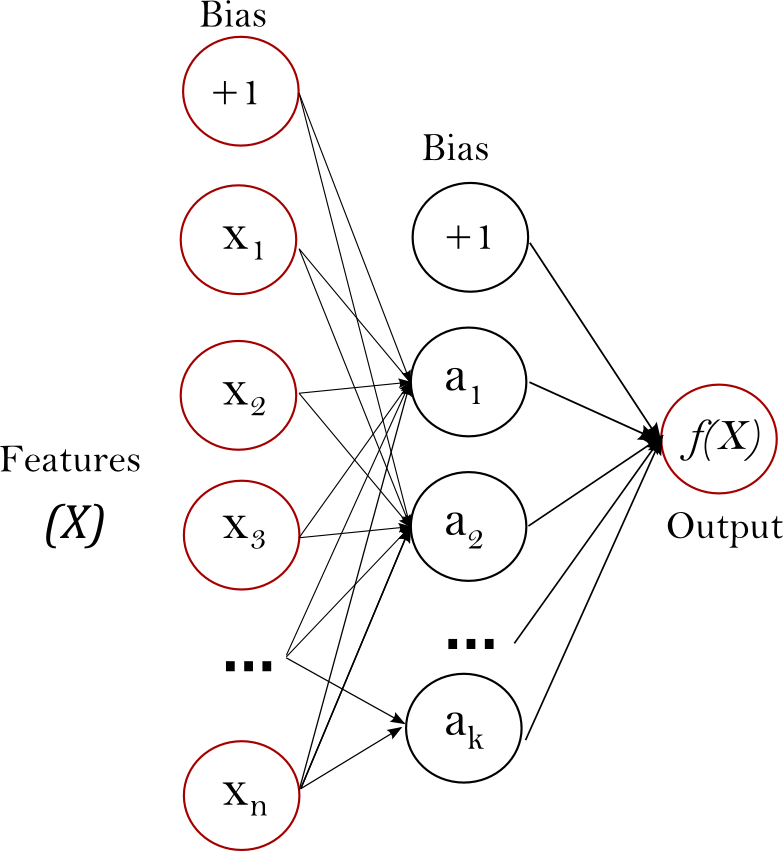 The leftmost layer, known as the input layer, consists of a set of neurons representing the input features. Each neuron in the hidden layer transforms the values from the previous layer with a weighted linear summation , followed by a non-linear activation function - like the hyperbolic tan function. The output layer receives the values from the last hidden layer and transforms them into output values.

The advantages of Multi-layer Perceptron are:

The disadvantages of Multi-layer Perceptron (MLP) include:

After fitting (training), the model can predict labels for new samples:

MLP can fit a non-linear model to the training data. clf.coefs_ contains the weight matrices that constitute the model parameters:

Further, the model supports multi-label classification in which a sample can belong to more than one class. For each class, the raw output passes through the logistic function. Values larger or equal to 0.5 are rounded to 1, otherwise to 0. For a predicted output of a sample, the indices where the value is 1 represents the assigned classes of that sample:

Class MLPRegressor implements a multi-layer perceptron (MLP) that trains using backpropagation with no activation function in the output layer, which can also be seen as using the identity function as activation function. Therefore, it uses the square error as the loss function, and the output is a set of continuous values.

MLPRegressor also supports multi-output regression, in which a sample can have more than one target.

Both MLPRegressor and MLPClassifier use parameter alpha for regularization (L2 regularization) term which helps in avoiding overfitting by penalizing weights with large magnitudes. Following plot displays varying decision function with value of alpha. 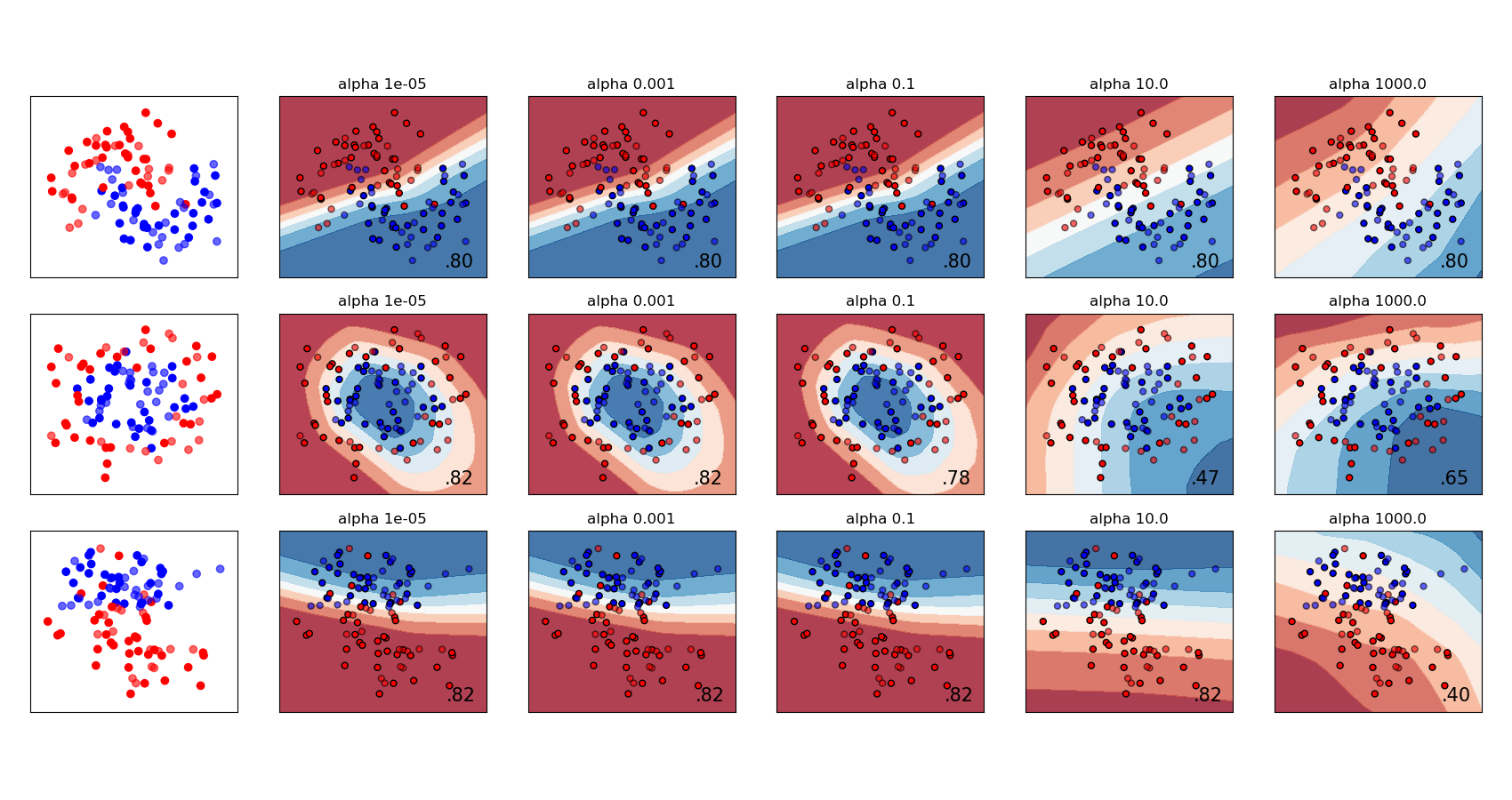 where is the learning rate which controls the step-size in the parameter space search. is the loss function used for the network.

Adam is similar to SGD in a sense that it is a stochastic optimizer, but it can automatically adjust the amount to update parameters based on adaptive estimates of lower-order moments.

With SGD or Adam, training supports online and mini-batch learning.

If the selected solver is ‘L-BFGS’, training does not support online nor mini-batch learning.

Suppose there are training samples, features, hidden layers, each containing neurons - for simplicity, and output neurons. The time complexity of backpropagation is , where is the number of iterations. Since backpropagation has a high time complexity, it is advisable to start with smaller number of hidden neurons and few hidden layers for training.

For binary classification, passes through the logistic function to obtain output values between zero and one. A threshold, set to 0.5, would assign samples of outputs larger or equal 0.5 to the positive class, and the rest to the negative class.

If there are more than two classes, itself would be a vector of size (n_classes,). Instead of passing through logistic function, it passes through the softmax function, which is written as,

where represents the th element of the input to softmax, which corresponds to class , and is the number of classes. The result is a vector containing the probabilities that sample belong to each class. The output is the class with the highest probability.

In regression, the output remains as ; therefore, output activation function is just the identity function.

MLP uses different loss functions depending on the problem type. The loss function for classification is Cross-Entropy, which in binary case is given as,

where is an L2-regularization term (aka penalty) that penalizes complex models; and is a non-negative hyperparameter that controls the magnitude of the penalty.

Starting from initial random weights, multi-layer perceptron (MLP) minimizes the loss function by repeatedly updating these weights. After computing the loss, a backward pass propagates it from the output layer to the previous layers, providing each weight parameter with an update value meant to decrease the loss.

In gradient descent, the gradient of the loss with respect to the weights is computed and deducted from . More formally, this is expressed as,

where is the iteration step, and is the learning rate with a value larger than 0.

The algorithm stops when it reaches a preset maximum number of iterations; or when the improvement in loss is below a certain, small number.

If you want more control over stopping criteria or learning rate in SGD, or want to do additional monitoring, using warm_start=True and max_iter=1 and iterating yourself can be helpful: