These classifiers are attractive because they have closed-form solutions that can be easily computed, are inherently multiclass, have proven to work well in practice, and have no hyperparameters to tune. 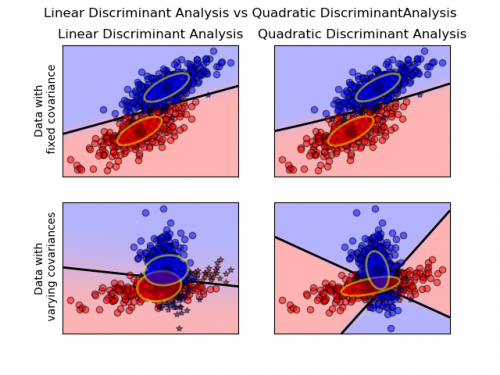 discriminant_analysis.LinearDiscriminantAnalysis can be used to perform supervised dimensionality reduction, by projecting the input data to a linear subspace consisting of the directions which maximize the separation between classes (in a precise sense discussed in the mathematics section below). The dimension of the output is necessarily less than the number of classes, so this is, in general, a rather strong dimensionality reduction, and only makes sense in a multiclass setting.

Mathematical formulation of the LDA and QDA classifiers

Both LDA and QDA can be derived from simple probabilistic models which model the class conditional distribution of the data for each class . Predictions can then be obtained by using Bayes’ rule:

and we select the class which maximizes this conditional probability.

More specifically, for linear and quadratic discriminant analysis, is modeled as a multivariate Gaussian distribution with density:

where is the number of features.

To use this model as a classifier, we just need to estimate from the training data the class priors  (by the proportion of instances of class ), the class means (by the empirical sample class means) and the covariance matrices (either by the empirical sample class covariance matrices, or by a regularized estimator: see the section on shrinkage below).

In the case of LDA, the Gaussians for each class are assumed to share the same covariance matrix: for all . This leads to linear decision surfaces, which can be seen by comparing the log-probability ratios :

In the case of QDA, there are no assumptions on the covariance matrices  of the Gaussians, leading to quadratic decision surfaces. See for more details.

To understand the use of LDA in dimensionality reduction, it is useful to start with a geometric reformulation of the LDA classification rule explained above. We write K for the total number of target classes. Since in LDA we assume that all classes have the same estimated covariance , we can rescale the data so that this covariance is the identity:

Then one can show that to classify a data point after scaling is equivalent to finding the estimated class mean  which is closest to the data point in the Euclidean distance. But this can be done just as well after projecting on the K-1 affine subspace generated by all the  for all classes. This shows that, implicit in the LDA classifier, there is a dimensionality reduction by linear projection onto a K-1 dimensional space.
We can reduce the dimension even more, to a chosen L, by projecting onto the linear subspace which maximizes the variance of the  after projection (in effect, we are doing a form of PCA for the transformed class means ). This L corresponds to the n_components parameter used in the discriminant_analysis.LinearDiscriminantAnalysis.transform method. See for more details.

Shrinkage is a tool to improve estimation of covariance matrices in situations where the number of training samples is small compared to the number of features. In this scenario, the empirical sample covariance is a poor estimator. Shrinkage LDA can be used by setting the shrinkage parameter of the discriminant_analysis.LinearDiscriminantAnalysis class to ‘auto’. This automatically determines the optimal shrinkage parameter in an analytic way following the lemma introduced by Ledoit and Wolf . Note that currently shrinkage only works when setting the solver parameter to ‘lsqr’ or ‘eigen’.
The shrinkage parameter can also be manually set between 0 and 1. In particular, a value of 0 corresponds to no shrinkage (which means the empirical covariance matrix will be used) and a value of 1 corresponds to complete shrinkage (which means that the diagonal matrix of variances will be used as an estimate for the covariance matrix). Setting this parameter to a value between these two extrema will estimate a shrunk version of the covariance matrix. 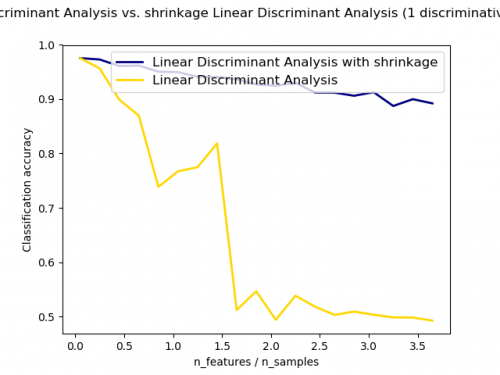 The default solver is ‘svd’. It can perform both classification and transform, and it does not rely on the calculation of the covariance matrix. This can be an advantage in situations where the number of features is large. However, the ‘svd’ solver cannot be used with shrinkage.
The ‘lsqr’ solver is an efficient algorithm that only works for classification. It supports shrinkage.
The ‘eigen’ solver is based on the optimization of the between class scatter to within class scatter ratio. It can be used for both classification and transform, and it supports shrinkage. However, the ‘eigen’ solver needs to compute the covariance matrix, so it might not be suitable for situations with a high number of features.