The principle behind nearest neighbor methods is to find a predefined number of training samples closest in distance to the new point, and predict the label from these. The number of samples can be a user-defined constant (k-nearest neighbor learning), or vary based on the local density of points (radius-based neighbor learning). The distance can, in general, be any metric measure: standard Euclidean distance is the most common choice. Neighbors-based methods are known as non-generalizing machine learning methods, since they simply “remember” all of its training data (possibly transformed into a fast indexing structure such as a Ball Tree or KD Tree).

Despite its simplicity, nearest neighbors has been successful in a large number of classification and regression problems, including handwritten digits and satellite image scenes. Being a non-parametric method, it is often successful in classification situations where the decision boundary is very irregular.

NearestNeighbors implements unsupervised nearest neighbors learning. It acts as a uniform interface to three different nearest neighbors algorithms: BallTree, KDTree, and a brute-force algorithm based on routines in sklearn.metrics.pairwise. The choice of neighbors search algorithm is controlled through the keyword 'algorithm', which must be one of ['auto', 'ball_tree', 'kd_tree', 'brute']. When the default value 'auto' is passed, the algorithm attempts to determine the best approach from the training data. For a discussion of the strengths and weaknesses of each option, see Nearest Neighbor Algorithms.

Warning: Regarding the Nearest Neighbors algorithms, if two neighbors k+1 and k have identical distances but different labels, the result will depend on the ordering of the training data.

For the simple task of finding the nearest neighbors between two sets of data, the unsupervised algorithms within sklearn.neighbors can be used:

Because the query set matches the training set, the nearest neighbor of each point is the point itself, at a distance of zero.

It is also possible to efficiently produce a sparse graph showing the connections between neighboring points:

The dataset is structured such that points nearby in index order are nearby in parameter space, leading to an approximately block-diagonal matrix of K-nearest neighbors. Such a sparse graph is useful in a variety of circumstances which make use of spatial relationships between points for unsupervised learning: in particular, see sklearn.manifold.Isomap, sklearn.manifold.LocallyLinearEmbedding, and sklearn.cluster.SpectralClustering.

Alternatively, one can use the KDTree or BallTree classes directly to find nearest neighbors. This is the functionality wrapped by the NearestNeighbors class used above. The Ball Tree and KD Tree have the same interface; we’ll show an example of using the KD Tree here:

Refer to the KDTree and BallTree class documentation for more information on the options available for nearest neighbors searches, including specification of query strategies, distance metrics, etc. For a list of available metrics, see the documentation of the DistanceMetric class.

Neighbors-based classification is a type of instance-based learning or non-generalizing learning: it does not attempt to construct a general internal model, but simply stores instances of the training data. Classification is computed from a simple majority vote of the nearest neighbors of each point: a query point is assigned the data class which has the most representatives within the nearest neighbors of the point.

The k-neighbors classification in KNeighborsClassifier is the most commonly used technique. The optimal choice of the value is highly data-dependent: in general a larger suppresses the effects of noise, but makes the classification boundaries less distinct.

In cases where the data is not uniformly sampled, radius-based neighbors classification in RadiusNeighborsClassifier can be a better choice. The user specifies a fixed radius , such that points in sparser neighborhoods use fewer nearest neighbors for the classification. For high-dimensional parameter spaces, this method becomes less effective due to the so-called “curse of dimensionality”.

The basic nearest neighbors classification uses uniform weights: that is, the value assigned to a query point is computed from a simple majority vote of the nearest neighbors. Under some circumstances, it is better to weight the neighbors such that nearer neighbors contribute more to the fit. This can be accomplished through the weights keyword. The default value, weights = 'uniform', assigns uniform weights to each neighbor. weights = 'distance' assigns weights proportional to the inverse of the distance from the query point. Alternatively, a user-defined function of the distance can be supplied to compute the weights. 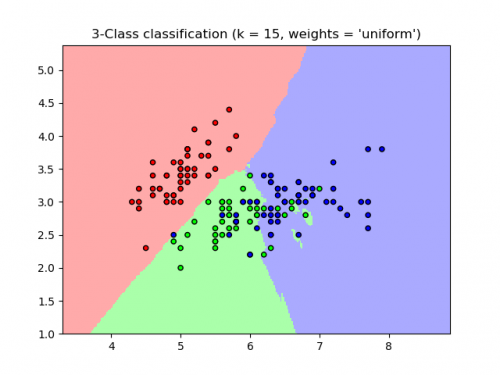 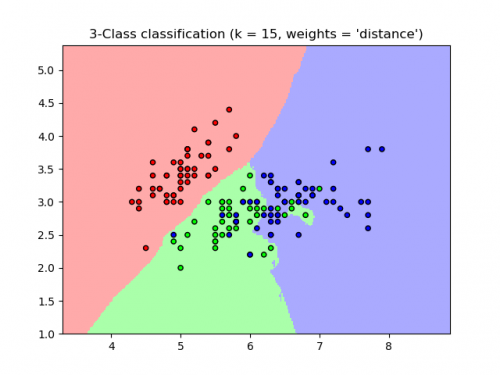 Neighbors-based regression can be used in cases where the data labels are continuous rather than discrete variables. The label assigned to a query point is computed based on the mean of the labels of its nearest neighbors.

The basic nearest neighbors regression uses uniform weights: that is, each point in the local neighborhood contributes uniformly to the classification of a query point. Under some circumstances, it can be advantageous to weight points such that nearby points contribute more to the regression than faraway points. This can be accomplished through the weights keyword. The default value, weights = 'uniform', assigns equal weights to all points. weights = 'distance' assigns weights proportional to the inverse of the distance from the query point. Alternatively, a user-defined function of the distance can be supplied, which will be used to compute the weights. 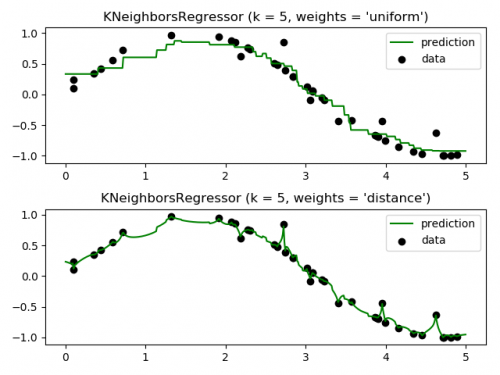 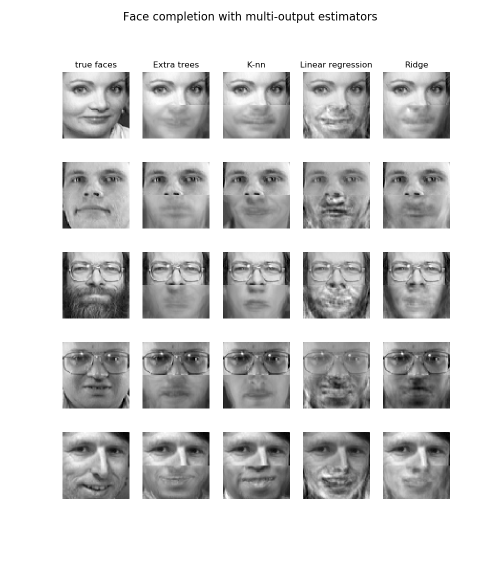 Fast computation of nearest neighbors is an active area of research in machine learning. The most naive neighbor search implementation involves the brute-force computation of distances between all pairs of points in the dataset: for samples in dimensions, this approach scales as . Efficient brute-force neighbors searches can be very competitive for small data samples. However, as the number of samples grows, the brute-force approach quickly becomes infeasible. In the classes within sklearn.neighbors, brute-force neighbors searches are specified using the keyword algorithm = 'brute', and are computed using the routines available in sklearn.metrics.pairwise.

To address the computational inefficiencies of the brute-force approach, a variety of tree-based data structures have been invented. In general, these structures attempt to reduce the required number of distance calculations by efficiently encoding aggregate distance information for the sample. The basic idea is that if point is very distant from point , and point is very close to point , then we know that points and are very distant, without having to explicitly calculate their distance. In this way, the computational cost of a nearest neighbors search can be reduced to or better. This is a significant improvement over brute-force for large .

An early approach to taking advantage of this aggregate information was the KD tree data structure (short for K-dimensional tree), which generalizes two-dimensional Quad-trees and 3-dimensional Oct-trees to an arbitrary number of dimensions. The KD tree is a binary tree structure which recursively partitions the parameter space along the data axes, dividing it into nested orthotropic regions into which data points are filed. The construction of a KD tree is very fast: because partitioning is performed only along the data axes, no -dimensional distances need to be computed. Once constructed, the nearest neighbor of a query point can be determined with only distance computations. Though the KD tree approach is very fast for low-dimensional () neighbors searches, it becomes inefficient as grows very large: this is one manifestation of the so-called “curse of dimensionality”. In scikit-learn, KD tree neighbors searches are specified using the keyword algorithm = 'kd_tree', and are computed using the class KDTree.

To address the inefficiencies of KD Trees in higher dimensions, the ball tree data structure was developed. Where KD trees partition data along Cartesian axes, ball trees partition data in a series of nesting hyper-spheres. This makes tree construction more costly than that of the KD tree, but results in a data structure which can be very efficient on highly structured data, even in very high dimensions.

A ball tree recursively divides the data into nodes defined by a centroid and radius , such that each point in the node lies within the hyper-sphere defined by and . The number of candidate points for a neighbor search is reduced through use of the triangle inequality:

With this setup, a single distance calculation between a test point and the centroid is sufficient to determine a lower and upper bound on the distance to all points within the node. Because of the spherical geometry of the ball tree nodes, it can out-perform a KD-tree in high dimensions, though the actual performance is highly dependent on the structure of the training data. In scikit-learn, ball-tree-based neighbors searches are specified using the keyword algorithm = 'ball_tree', and are computed using the class sklearn.neighbors.BallTree. Alternatively, the user can work with the BallTree class directly.

The optimal algorithm for a given dataset is a complicated choice, and depends on a number of factors:

For small data sets ( less than 30 or so),  is comparable to , and brute force algorithms can be more efficient than a tree-based approach. Both KDTree and BallTree address this through providing a leaf size parameter: this controls the number of samples at which a query switches to brute-force. This allows both algorithms to approach the efficiency of a brute-force computation for small .

Datasets used in machine learning tend to be very structured, and are very well-suited for tree-based queries.

As becomes large compared to , the ability to prune branches in a tree-based query is reduced. In this situation, Brute force queries can be more efficient.

As noted above, for small sample sizes a brute force search can be more efficient than a tree-based query. This fact is accounted for in the ball tree and KD tree by internally switching to brute force searches within leaf nodes. The level of this switch can be specified with the parameter leaf_size. This parameter choice has many effects:

A larger leaf_size leads to a faster tree construction time, because fewer nodes need to be created

As leaf_size increases, the memory required to store a tree structure decreases. This is especially important in the case of ball tree, which stores a -dimensional centroid for each node. The required storage space for BallTree is approximately 1 / leaf_size times the size of the training set.

leaf_size is not referenced for brute force queries.

The NearestCentroid classifier is a simple algorithm that represents each class by the centroid of its members. In effect, this makes it similar to the label updating phase of the sklearn.KMeans algorithm. It also has no parameters to choose, making it a good baseline classifier. It does, however, suffer on non-convex classes, as well as when classes have drastically different variances, as equal variance in all dimensions is assumed. See Linear Discriminant Analysis (sklearn.discriminant_analysis.LinearDiscriminantAnalysis) and Quadratic Discriminant Analysis (sklearn.discriminant_analysis.QuadraticDiscriminantAnalysis) for more complex methods that do not make this assumption. Usage of the default NearestCentroid is simple:

The NearestCentroid classifier has a shrink_threshold parameter, which implements the nearest shrunken centroid classifier. In effect, the value of each feature for each centroid is divided by the within-class variance of that feature. The feature values are then reduced by shrink_threshold. Most notably, if a particular feature value crosses zero, it is set to zero. In effect, this removes the feature from affecting the classification. This is useful, for example, for removing noisy features.

In the example below, using a small shrink threshold increases the accuracy of the model from 0.81 to 0.82. 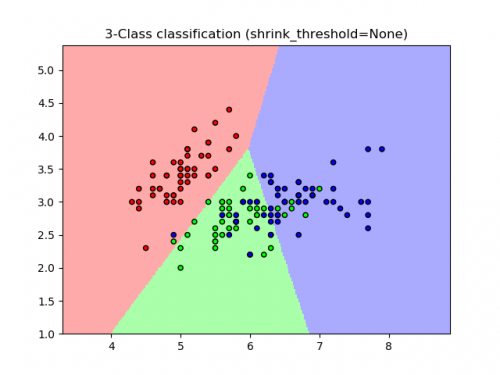 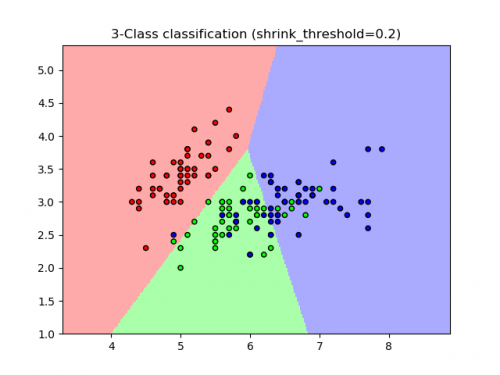