Stochastic Gradient Descent (SGD) is a simple yet very efficient approach to discriminative learning of linear classifiers under convex loss functions such as (linear) Support Vector Machines and Logistic Regression. Even though SGD has been around in the machine learning community for a long time, it has received a considerable amount of attention just recently in the context of large-scale learning.

SGD has been successfully applied to large-scale and sparse machine learning problems often encountered in text classification and natural language processing. Given that the data is sparse, the classifiers in this module easily scale to problems with more than 10^5 training examples and more than 10^5 features.

The advantages of Stochastic Gradient Descent are:

The disadvantages of Stochastic Gradient Descent include:

Warning: Make sure you permute (shuffle) your training data before fitting the model or use shuffle=True to shuffle after each iteration.
The class SGDClassifier implements a plain stochastic gradient descent learning routine which supports different loss functions and penalties for classification. 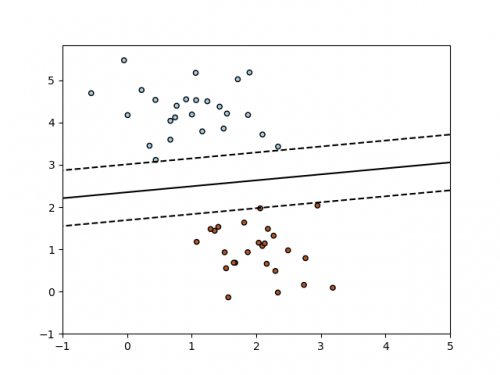 After being fitted, the model can then be used to predict new values:

SGD fits a linear model to the training data. The member coef_ holds the model parameters:

Member intercept_ holds the intercept (aka offset or bias):

Whether or not the model should use an intercept, i.e. a biased hyperplane, is controlled by the parameter fit_intercept.

To get the signed distance to the hyperplane use SGDClassifier.decision_function:

The concrete loss function can be set via the loss parameter. SGDClassifier supports the following loss functions:

The first two loss functions are lazy, they only update the model parameters if an example violates the margin constraint, which makes training very efficient and may result in sparser models, even when L2 penalty is used.

Using loss="log" or loss="modified_huber" enables the predict_proba method, which gives a vector of probability estimates per sample :

The concrete penalty can be set via the penalty parameter. SGD supports the following penalties:

The default setting is penalty="l2". The L1 penalty leads to sparse solutions, driving most coefficients to zero. The Elastic Net solves some deficiencies of the L1 penalty in the presence of highly correlated attributes. The parameter l1_ratio controls the convex combination of L1 and L2 penalty.

SGDClassifier supports multi-class classification by combining multiple binary classifiers in a “one versus all” (OVA) scheme. For each of the classes, a binary classifier is learned that discriminates between that and all other classes. At testing time, we compute the confidence score (i.e. the signed distances to the hyperplane) for each classifier and choose the class with the highest confidence. The Figure below illustrates the OVA approach on the iris dataset. The dashed lines represent the three OVA classifiers; the background colors show the decision surface induced by the three classifiers. 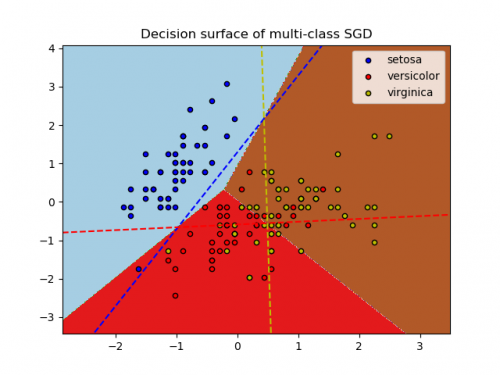 In the case of multi-class classification coef_ is a two-dimensional array of shape=[n_classes, n_features] and intercept_ is a one-dimensional array of shape=[n_classes]. The i-th row of coef_ holds the weight vector of the OVA classifier for the i-th class; classes are indexed in ascending order (see attribute classes_). Note that, in principle, since they allow to create a probability model, loss="log" and loss="modified_huber" are more suitable for one-vs-all classification.

SGDClassifier supports both weighted classes and weighted instances via the fit parameters class_weight and sample_weight. See the examples below and the doc string of SGDClassifier.fit for further information.

SGDClassifier supports averaged SGD (ASGD). Averaging can be enabled by setting `average=True`. ASGD works by averaging the coefficients of the plain SGD over each iteration over a sample. When using ASGD the learning rate can be larger and even constant leading on some datasets to a speed up in training time.

For classification with a logistic loss, another variant of SGD with an averaging strategy is available with Stochastic Average Gradient (SAG) algorithm, available as a solver in LogisticRegression.

The class SGDRegressor implements a plain stochastic gradient descent learning routine which supports different loss functions and penalties to fit linear regression models. SGDRegressor is well suited for regression problems with a large number of training samples (> 10.000), for other problems we recommend Ridge, Lasso, or ElasticNet.

The concrete loss function can be set via the loss parameter. SGDRegressor supports the following loss functions:

The Huber and epsilon-insensitive loss functions can be used for robust regression. The width of the insensitive region has to be specified via the parameter epsilon. This parameter depends on the scale of the target variables.

For regression with a squared loss and a l2 penalty, another variant of SGD with an averaging strategy is available with Stochastic Average Gradient (SAG) algorithm, available as a solver in Ridge.

There is built-in support for sparse data given in any matrix in a format supported by scipy.sparse. For maximum efficiency, however, use the CSR matrix format as defined in scipy.sparse.csr_matrix.

The major advantage of SGD is its efficiency, which is basically linear in the number of training examples. If X is a matrix of size (n, p) training has a cost of , where k is the number of iterations (epochs) and is the average number of non-zero attributes per sample.

Recent theoretical results, however, show that the runtime to get some desired optimization accuracy does not increase as the training set size increases.

The classes SGDClassifier and SGDRegressor provide two criteria to stop the algorithm when a given level of convergence is reached:

If your attributes have an intrinsic scale (e.g. word frequencies or indicator features) scaling is not needed.

Given a set of training examples where and , our goal is to learn a linear scoring function with model parameters and intercept . In order to make predictions, we simply look at the sign of . A common choice to find the model parameters is by minimizing the regularized training error given by

where is a loss function that measures model (mis)fit and is a regularization term (aka penalty) that penalizes model complexity; is a non-negative hyperparameter.

Different choices for entail different classifiers such as

All of the above loss functions can be regarded as an upper bound on the misclassification error (Zero-one loss) as shown in the Figure below. 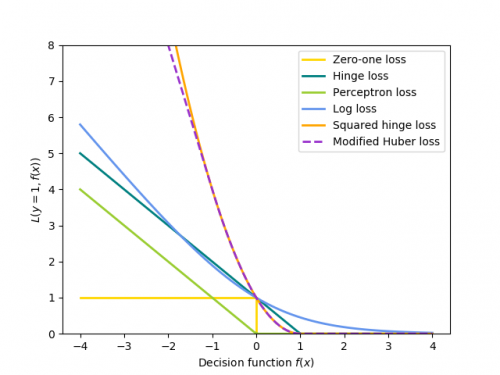 Popular choices for the regularization term include:

The Figure below shows the contours of the different regularization terms in the parameter space when . 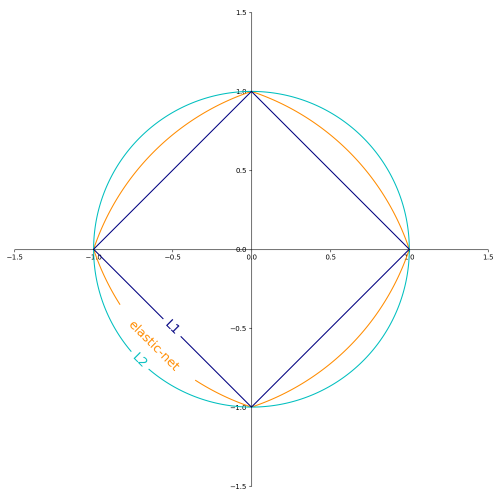 The class SGDClassifier implements a first-order SGD learning routine. The algorithm iterates over the training examples and for each example updates the model parameters according to the update rule given by

where is the learning rate which controls the step-size in the parameter space. The intercept is updated similarly but without regularization.

The learning rate can be either constant or gradually decaying. For classification, the default learning rate schedule (learning_rate='optimal') is given by

where is the time step (there are a total of n_samples * n_iter time steps), is determined based on a heuristic proposed by Léon Bottou such that the expected initial updates are comparable with the expected size of the weights (this assuming that the norm of the training samples is approx. 1). The exact definition can be found in _init_t in BaseSGD.

For regression the default learning rate schedule is inverse scaling (learning_rate='invscaling'), given by

where and    are hyperparameters chosen by the user via eta0 and power_t, resp.

The model parameters can be accessed through the members coef_ and intercept_:

The implementation of SGD is influenced by the Stochastic Gradient SVM of Léon Bottou. Similar to SvmSGD, the weight vector is represented as the product of a scalar and a vector which allows an efficient weight update in the case of L2 regularization. In the case of sparse feature vectors, the intercept is updated with a smaller learning rate (multiplied by 0.01) to account for the fact that it is updated more frequently. Training examples are picked up sequentially and the learning rate is lowered after each observed example. We adopted the learning rate schedule from Shalev-Shwartz et al. 2007. For multi-class classification, a “one versus all” approach is used. We use the truncated gradient algorithm proposed by Tsuruoka et al. 2009 for L1 regularization (and the Elastic Net). The code is written in Cython.