The advantages of support vector machines are:

The disadvantages of support vector machines include:

The support vector machines in scikit-learn support both dense (numpy.ndarray and convertible to that by numpy.asarray) and sparse (any scipy.sparse) sample vectors as input. However, to use an SVM to make predictions for sparse data, it must have been fit on such data. For optimal performance, use C-ordered numpy.ndarray (dense) or scipy.sparse.csr_matrix (sparse) with dtype=float64.

SVC, NuSVC and LinearSVC are classes capable of performing multi-class classification on a dataset. 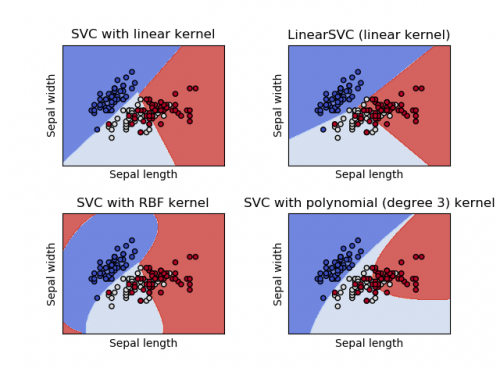 SVC and NuSVC are similar methods, but accept slightly different sets of parameters and have different mathematical formulations (see section Mathematical formulation). On the other hand, LinearSVC is another implementation of Support Vector Classification for the case of a linear kernel. Note that LinearSVC does not accept keyword kernel, as this is assumed to be linear. It also lacks some of the members of SVC and NuSVC, like support_.

As other classifiers, SVC, NuSVC and LinearSVC take as input two arrays: an array X of size [n_samples, n_features] holding the training samples, and an array y of class labels (strings or integers), size [n_samples]:

After being fitted, the model can then be used to predict new values:

SVMs decision function depends on some subset of the training data, called the support vectors. Some properties of these support vectors can be found in members support_vectors_, support_ and n_support:

SVC and NuSVC implement the “one-against-one” approach (Knerr et al., 1990) for multi- class classification. If n_class is the number of classes, then n_class * (n_class - 1) / 2 classifiers are constructed and each one trains data from two classes. To provide a consistent interface with other classifiers, the decision_function_shape option allows to aggregate the results of the “one-against-one” classifiers to a decision function of shape (n_samples, n_classes):

On the other hand, LinearSVC implements “one-vs-the-rest” multi-class strategy, thus training n_class models. If there are only two classes, only one model is trained:

See Mathematical formulation for a complete description of the decision function.

Note that the LinearSVC also implements an alternative multi-class strategy, the so-called multi-class SVM formulated by Crammer and Singer, by using the option multi_class='crammer_singer'. This method is consistent, which is not true for one-vs-rest classification. In practice, one-vs-rest classification is usually preferred, since the results are mostly similar, but the runtime is significantly less.

For “one-vs-rest” LinearSVC the attributes coef_ and intercept_ have the shape [n_class, n_features] and [n_class] respectively. Each row of the coefficients corresponds to one of the n_class many “one-vs-rest” classifiers and similar for the intercepts, in the order of the “one” class.

The decision_function method of SVC and NuSVC gives per-class scores for each sample (or a single score per sample in the binary case). When the constructor option probability is set to True, class membership probability estimates (from the methods predict_proba and predict_log_proba) are enabled. In the binary case, the probabilities are calibrated using Platt scaling: logistic regression on the SVM’s scores, fit by an additional cross-validation on the training data. In the multiclass case, this is extended as per Wu et al. (2004).

Needless to say, the cross-validation involved in Platt scaling is an expensive operation for large datasets. In addition, the probability estimates may be inconsistent with the scores, in the sense that the “argmax” of the scores may not be the argmax of the probabilities. (E.g., in binary classification, a sample may be labeled by predict as belonging to a class that has probability <½ according to predict_proba.) Platt’s method is also known to have theoretical issues. If confidence scores are required, but these do not have to be probabilities, then it is advisable to set probability=False and use decision_function instead of predict_proba.

In problems where it is desired to give more importance to certain classes or certain individual samples keywords class_weight and sample_weight can be used.

SVC (but not NuSVC) implement a keyword class_weight in the fit method. It’s a dictionary of the form {class_label : value}, where value is a floating point number > 0 that sets the parameter C of class class_label to C * value. 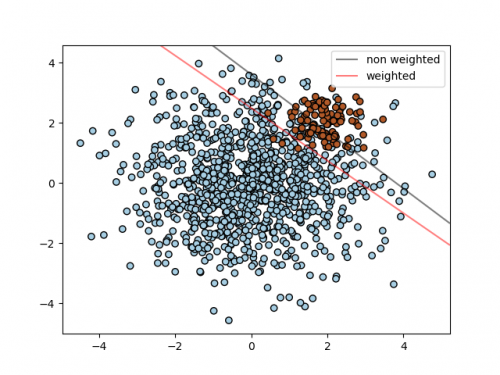 SVC, NuSVC, SVR, NuSVR and OneClassSVM implement also weights for individual samples in method fit through keyword sample_weight. Similar to class_weight, these set the parameter C for the i-th example to C * sample_weight[i].

As with classification classes, the fit method will take as argument vectors X, y, only that in this case y is expected to have floating point values instead of integer values:

The class OneClassSVM implements a One-Class SVM which is used in outlier detection.

See Novelty and Outlier Detection for the description and usage of OneClassSVM.

Support Vector Machines are powerful tools, but their compute and storage requirements increase rapidly with the number of training vectors. The core of an SVM is a quadratic programming problem (QP), separating support vectors from the rest of the training data. The QP solver used by this libsvm-based implementation scales between and depending on how efficiently the libsvm cache is used in practice (dataset dependent). If the data is very sparse should be replaced by the average number of non-zero features in a sample vector.

Also note that for the linear case, the algorithm used in LinearSVC by the liblinear implementation is much more efficient than its libsvm-based SVC counterpart and can scale almost linearly to millions of samples and/or features.

The kernel function can be any of the following:

Different kernels are specified by keyword kernel at initialization:

You can define your own kernels by either giving the kernel as a python function or by precomputing the Gram matrix.

Classifiers with custom kernels behave the same way as any other classifiers, except that:

You can also use your own defined kernels by passing a function to the keyword kernel in the constructor.

The following code defines a linear kernel and creates a classifier instance that will use that kernel:

Set kernel='precomputed' and pass the Gram matrix instead of X in the fit method. At the moment, the kernel values between all training vectors and the test vectors must be provided.

Parameters of the RBF Kernel

Proper choice of C and gamma is critical to the SVM’s performance. One is advised to use sklearn.model_selection.GridSearchCV with C and gamma spaced exponentially far apart to choose good values.

A support vector machine constructs a hyper-plane or set of hyper-planes in a high or infinite dimensional space, which can be used for classification, regression or other tasks. Intuitively, a good separation is achieved by the hyper-plane that has the largest distance to the nearest training data points of any class (so-called functional margin), since in general the larger the margin the lower the generalization error of the classifier. 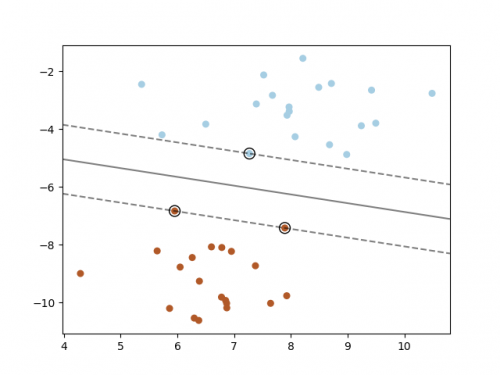 Given training vectors in two classes, and a vector , SVC solves the following primal problem:


where is the vector of all ones,  is the upper bound,  is an  by positive semidefinite matrix, ,  where is the kernel. Here training vectors are implicitly mapped into a higher (maybe infinite) dimensional space by the function .

The decision function is:

Note: While SVM models derived from libsvm and liblinear use C as regularization parameter, most other estimators use alpha. The exact equivalence between the amount of regularization of two models depends on the exact objective function optimized by the model. For example, when the estimator used is sklearn.linear_model.Ridge regression, the relation between them is given as  .

Given training vectors    and a vector   -SVR solves the following primal problem:


where is the vector of all ones,  is the upper bound,  is an by positive semidefinite matrix,  is the kernel. Here training vectors are implicitly mapped into a higher (maybe infinite) dimensional space by the function .

The decision function is:

Internally, we use libsvm and liblinear to handle all computations. These libraries are wrapped using C and Cython.