For visualization purposes, given a bicluster, the rows and columns of the data matrix may be rearranged to make the bicluster contiguous.

Algorithms differ in how they define biclusters. Some of the common types include:

If each row and each column belongs to exactly one bicluster, then rearranging the rows and columns of the data matrix reveals the biclusters on the diagonal. Here is an example of this structure where biclusters have higher average values than the other rows and columns: 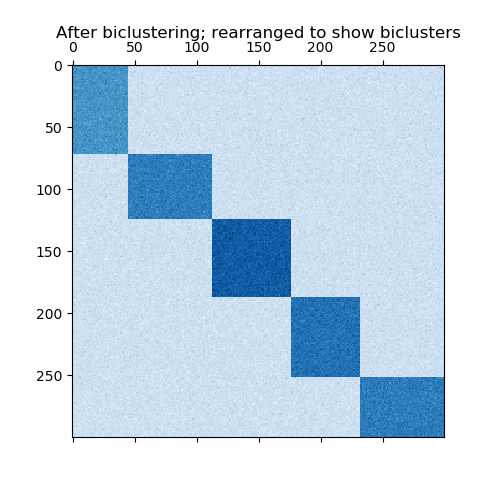 An example of biclusters formed by partitioning rows and columns.

In the checkerboard case, each row belongs to all column clusters, and each column belongs to all row clusters. Here is an example of this structure where the variance of the values within each bicluster is small: 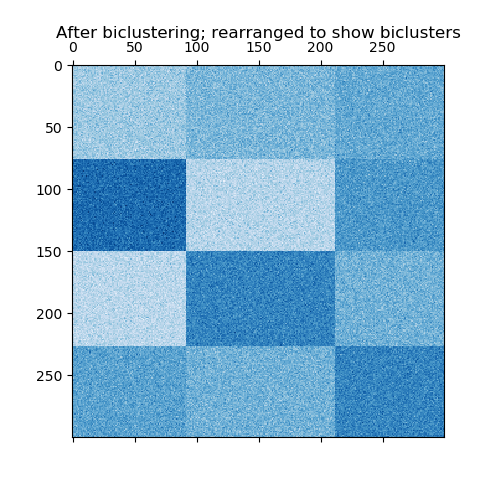 An example of checkerboard biclusters.

Some models also have row_labels_ and column_labels_ attributes. These models partition the rows and columns, such as in the block diagonal and checkerboard bicluster structures.

The SpectralCoclustering algorithm finds biclusters with values higher than those in the corresponding other rows and columns. Each row and each column belongs to exactly one bicluster, so rearranging the rows and columns to make partitions contiguous reveals these high values along the diagonal:

Note: The algorithm treats the input data matrix as a bipartite graph: the rows and columns of the matrix correspond to the two sets of vertices, and each entry corresponds to an edge between a row and a column. The algorithm approximates the normalized cut of this graph to find heavy subgraphs.

The input matrix is preprocessed as follows:

The singular vectors, starting from the second, provide the desired partitioning information. They are used to form the matrix :

where the columns of are , and similarly for .

The SpectralBiclustering algorithm assumes that the input data matrix has a hidden checkerboard structure. The rows and columns of a matrix with this structure may be partitioned so that the entries of any bicluster in the Cartesian product of row clusters and column clusters are approximately constant. For instance, if there are two row partitions and three column partitions, each row will belong to three biclusters, and each column will belong to two biclusters.

The algorithm partitions the rows and columns of a matrix so that a corresponding blockwise-constant checkerboard matrix provides a good approximation to the original matrix.

The input matrix is first normalized to make the checkerboard pattern more obvious. There are three possible methods:

Independent row and column normalization, as in Spectral Co-Clustering. This method makes the rows sum to a constant and the columns sum to a different constant.
Bistochastization: repeated row and column normalization until convergence. This method makes both rows and columns sum to the same constant.
Log normalization: the log of the data matrix is computed: . Then the column mean , row mean , and overall mean of are computed. The final matrix is computed according to the formula

After normalizing, the first few singular vectors are computed, just as in the Spectral Co-Clustering algorithm.

Given these singular vectors, they are ranked according to which can be best approximated by a piecewise-constant vector. The approximations for each vector are found using one-dimensional k-means and scored using the Euclidean distance. Some subset of the best left and right singular vector are selected. Next, the data is projected to this best subset of singular vectors and clustered.

For instance, if singular vectors were calculated, the best are found as described, where . Let be the matrix with columns the best left singular vectors, and similarly for the right. To partition the rows, the rows of are projected to a dimensional space: . Treating the rows of this matrix as samples and clustering using k-means yields the row labels. Similarly, projecting the columns to and clustering this matrix yields the column labels.

To compare individual biclusters, several measures have been used. For now, only the Jaccard index is implemented:

where and are biclusters, is the number of elements in their intersection. The Jaccard index achieves its minimum of 0 when the biclusters to not overlap at all and its maximum of 1 when they are identical.

Several methods have been developed to compare two sets of biclusters. For now, only consensus_score (Hochreiter et. al., 2010) is available:

The minimum consensus score, 0, occurs when all pairs of biclusters are totally dissimilar. The maximum score, 1, occurs when both sets are identical.