We assume that the observations are independent and identically distributed (i.i.d.).

The covariance matrix of a data set is known to be well approximated by the classical maximum likelihood estimator (or “empirical covariance”), provided the number of observations is large enough compared to the number of features (the variables describing the observations). More precisely, the Maximum Likelihood Estimator of a sample is an unbiased estimator of the corresponding population’s covariance matrix.

The empirical covariance matrix of a sample can be computed using the empirical_covariance function of the package, or by fitting an EmpiricalCovariance object to the data sample with the EmpiricalCovariance.fit method. Be careful that results depend on whether the data are centered, so one may want to use the assume_centered parameter accurately. More precisely, if assume_centered=False, then the test set is supposed to have the same mean vector as the training set. If not, both should be centered by the user, and assume_centered=True should be used.

In scikit-learn, this transformation (with a user-defined shrinkage coefficient) can be directly applied to a pre-computed covariance with the shrunk_covariance method. Also, a shrunk estimator of the covariance can be fitted to data with a ShrunkCovariance object and its ShrunkCovariance.fit method. Again, results depend on whether the data are centered, so one may want to use the assume_centered parameter accurately.

Mathematically, this shrinkage consists in reducing the ratio between the smallest and the largest eigenvalues of the empirical covariance matrix. It can be done by simply shifting every eigenvalue according to a given offset, which is equivalent of finding the l2-penalized Maximum Likelihood Estimator of the covariance matrix. In practice, shrinkage boils down to a simple a convex transformation.

Choosing the amount of shrinkage, amounts to setting a bias/variance trade-off, and is discussed below.

In their 2004 paper, O. Ledoit and M. Wolf propose a formula to compute the optimal shrinkage coefficient that minimizes the Mean Squared Error between the estimated and the real covariance matrix.

The Ledoit-Wolf estimator of the covariance matrix can be computed on a sample with the ledoit_wolf function of the sklearn.covariance package, or it can be otherwise obtained by fitting a LedoitWolf object to the same sample.

Under the assumption that the data are Gaussian distributed, Chen et al. derived a formula aimed at choosing a shrinkage coefficient that yields a smaller Mean Squared Error than the one given by Ledoit and Wolf’s formula. The resulting estimator is known as the Oracle Shrinkage Approximating estimator of the covariance.

The OAS estimator of the covariance matrix can be computed on a sample with the oas function of the sklearn.covariance package, or it can be otherwise obtained by fitting an OAS object to the same sample. 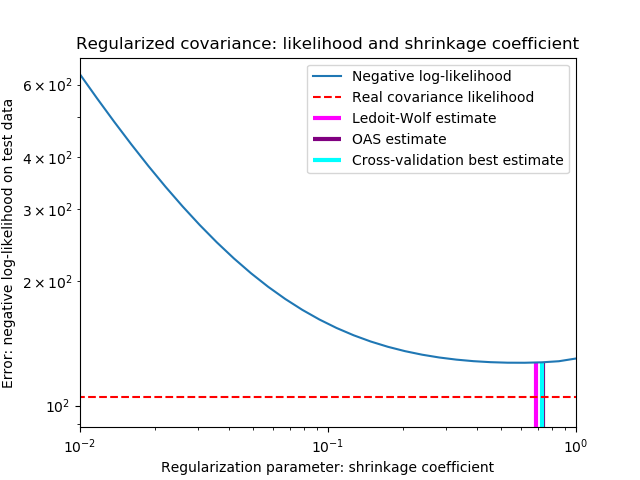 Bias-variance trade-off when setting the shrinkage: comparing the choices of Ledoit-Wolf and OAS estimators 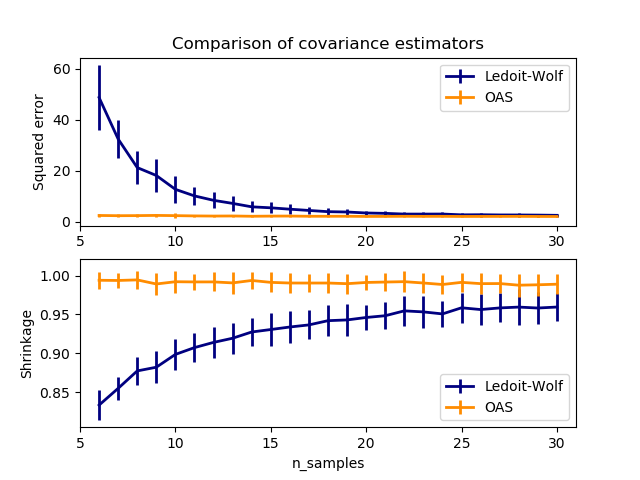 A comparison of maximum likelihood, shrinkage and sparse estimates of the covariance and precision matrix in the very small samples settings.

Recovering a graphical structure from correlations in the data is a challenging thing. If you are interested in such recovery keep in mind that:

The mathematical formulation is the following:

Where is the precision matrix to be estimated, and is the sample covariance matrix. is the sum of the absolute values of off-diagonal coefficients of . The algorithm employed to solve this problem is the GLasso algorithm, from the Friedman 2008 Biostatistics paper. It is the same algorithm as in the R glasso package.

The sklearn.covariance package implements a robust estimator of covariance, the Minimum Covariance Determinant .

Raw estimates can be accessed as raw_location_ and raw_covariance_ attributes of a MinCovDet robust covariance estimator object. 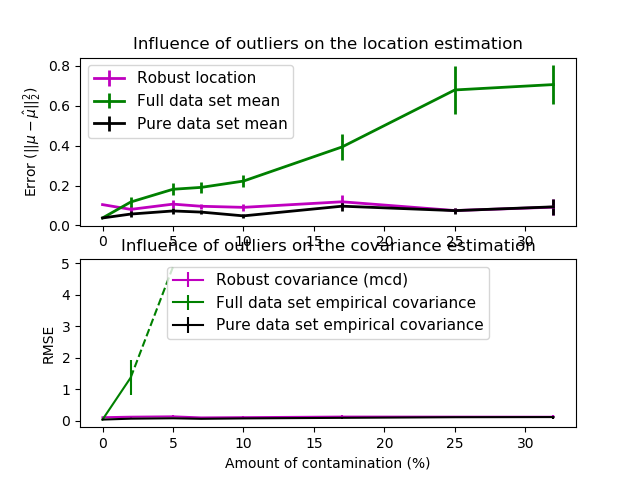 Influence of outliers on location and covariance estimates 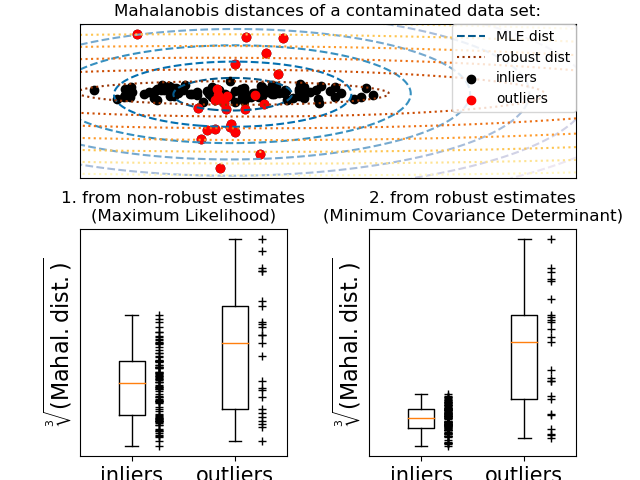