sklearn.mixture is a package which enables one to learn Gaussian Mixture Models (diagonal, spherical, tied and full covariance matrices supported), sample them, and estimate them from data. Facilities to help determine the appropriate number of components are also provided. 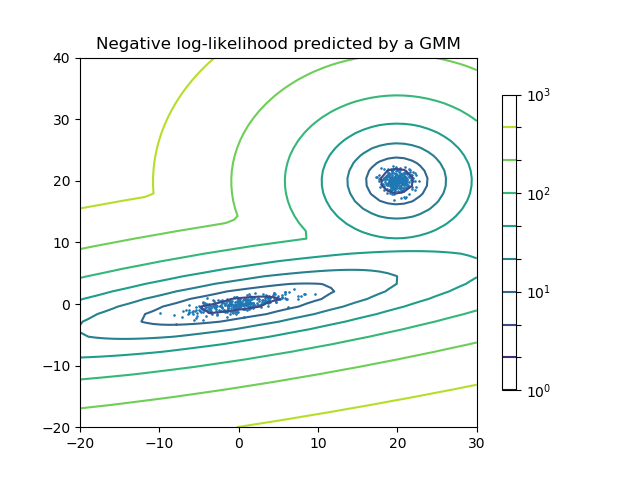 A Gaussian mixture model is a probabilistic model that assumes all the data points are generated from a mixture of a finite number of Gaussian distributions with unknown parameters. One can think of mixture models as generalizing k-means clustering to incorporate information about the covariance structure of the data as well as the centers of the latent Gaussians.
Scikit-learn implements different classes to estimate Gaussian mixture models, that correspond to different estimation strategies, detailed below.

The GaussianMixture object implements the expectation-maximization (EM) algorithm for fitting mixture-of-Gaussian models. It can also draw confidence ellipsoids for multivariate models, and compute the Bayesian Information Criterion to assess the number of clusters in the data. A GaussianMixture.fit method is provided that learns a Gaussian Mixture Model from train data. Given test data, it can assign to each sample the Gaussian it mostly probably belong to using the GaussianMixture.predict method.
The GaussianMixture comes with different options to constrain the covariance of the difference classes estimated: spherical, diagonal, tied or full covariance. 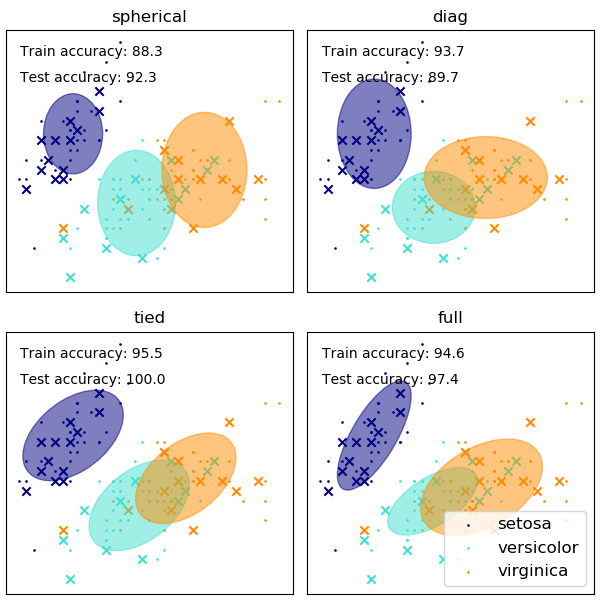 Pros and cons of class GaussianMixture

Selecting the number of components in a classical Gaussian Mixture Model 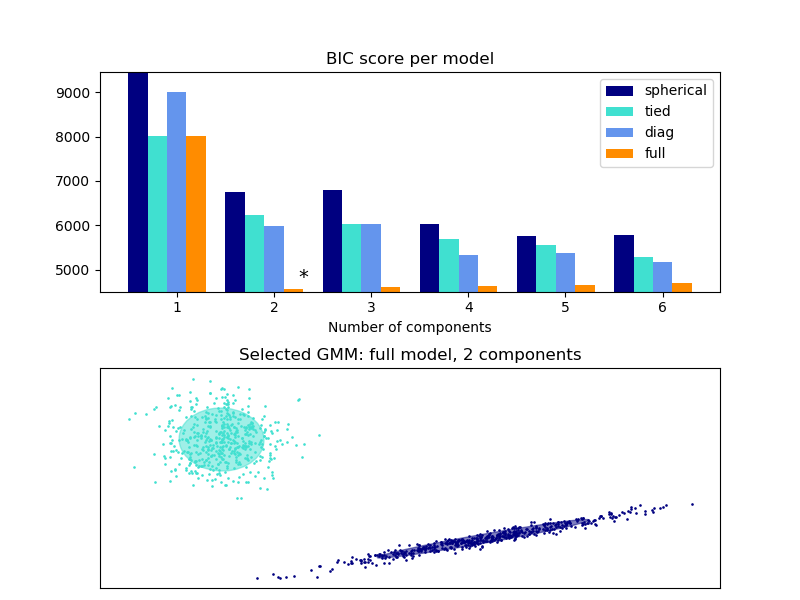 The main difficulty in learning Gaussian mixture models from unlabeled data is that it is one usually doesn’t know which points came from which latent component (if one has access to this information it gets very easy to fit a separate Gaussian distribution to each set of points). Expectation-maximization is a well-founded statistical algorithm to get around this problem by an iterative process. First one assumes random components (randomly centered on data points, learned from k-means, or even just normally distributed around the origin) and computes for each point a probability of being generated by each component of the model. Then, one tweaks the parameters to maximize the likelihood of the data given those assignments. Repeating this process is guaranteed to always converge to a local optimum.

The BayesianGaussianMixture object implements a variant of the Gaussian mixture model with variational inference algorithms. The API is similar as the one defined by GaussianMixture.

Variational inference is an extension of expectation-maximization that maximizes a lower bound on model evidence (including priors) instead of data likelihood. The principle behind variational methods is the same as expectation-maximization (that is both are iterative algorithms that alternate between finding the probabilities for each point to be generated by each mixture and fitting the mixture to these assigned points), but variational methods add regularization by integrating information from prior distributions. This avoids the singularities often found in expectation-maximization solutions but introduces some subtle biases to the model. Inference is often notably slower, but not usually as much so as to render usage unpractical.

The parameters implementation of the BayesianGaussianMixture class proposes two types of prior for the weights distribution: a finite mixture model with Dirichlet distribution and an infinite mixture model with the Dirichlet Process. In practice Dirichlet Process inference algorithm is approximated and uses a truncated distribution with a fixed maximum number of components (called the Stick-breaking representation). The number of components actually used almost always depends on the data. 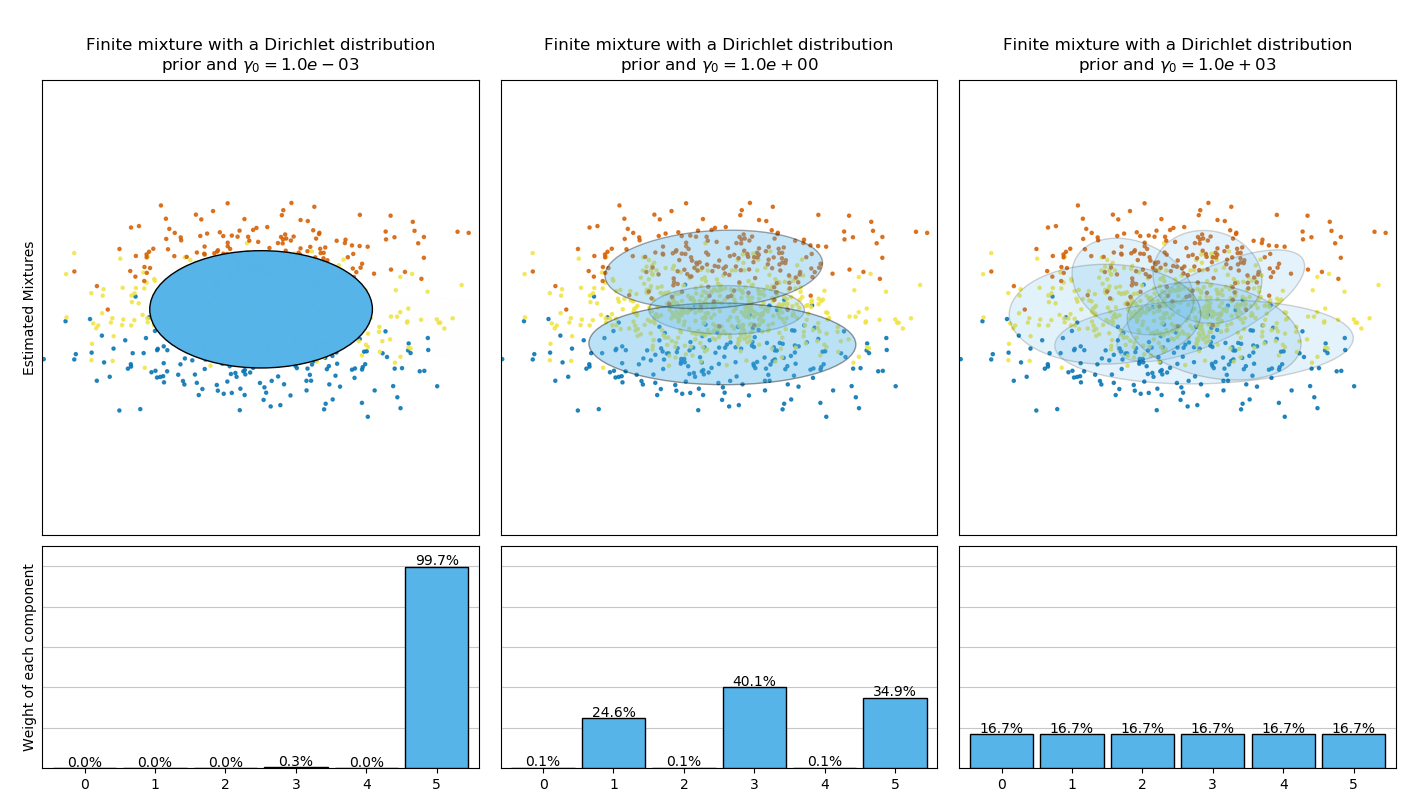 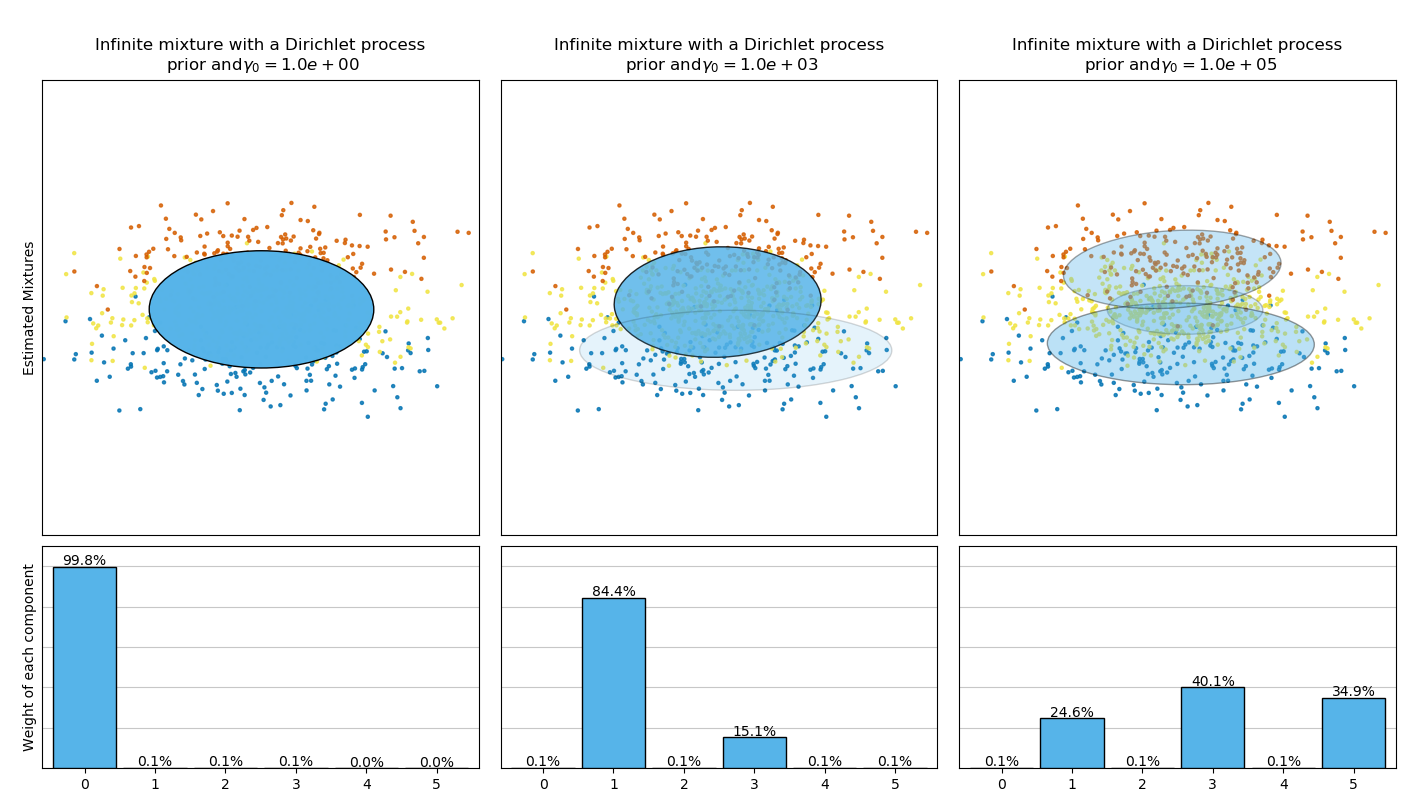 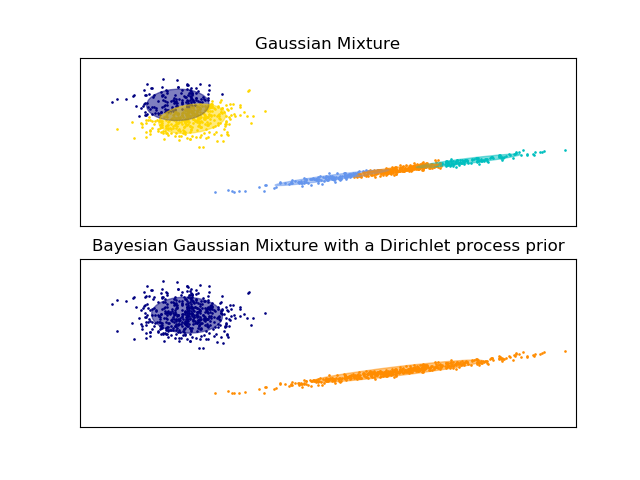 On the following figure we are fitting a dataset not well-depicted by a Gaussian mixture. Adjusting the weight_concentration_prior, parameter of the BayesianGaussianMixture controls the number of components used to fit this data. We also present on the last two plots a random sampling generated from the two resulting mixtures. 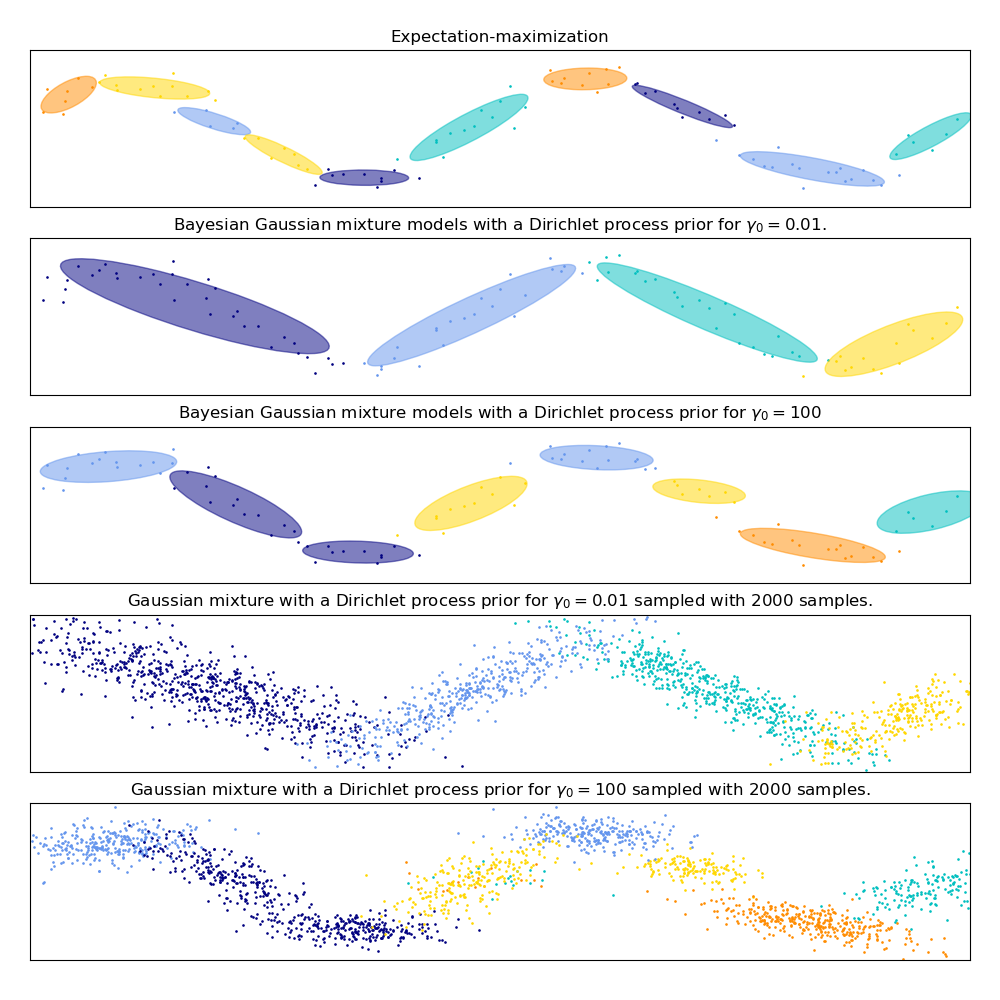 Pros and cons of variational inference with BayesianGaussianMixture

Here we describe variational inference algorithms on Dirichlet process mixture. The Dirichlet process is a prior probability distribution on clusterings with an infinite, unbounded, number of partitions. Variational techniques let us incorporate this prior structure on Gaussian mixture models at almost no penalty in inference time, comparing with a finite Gaussian mixture model.

An important question is how can the Dirichlet process use an infinite, unbounded number of clusters and still be consistent. While a full explanation doesn’t fit this manual, one can think of its stick breaking process analogy to help understanding it. The stick breaking process is a generative story for the Dirichlet process. We start with a unit-length stick and in each step we break off a portion of the remaining stick. Each time, we associate the length of the piece of the stick to the proportion of points that falls into a group of the mixture. At the end, to represent the infinite mixture, we associate the last remaining piece of the stick to the proportion of points that don’t fall into all the other groups. The length of each piece is a random variable with probability proportional to the concentration parameter. Smaller value of the concentration will divide the unit-length into larger pieces of the stick (defining more concentrated distribution). Larger concentration values will create smaller pieces of the stick (increasing the number of components with non zero weights).

Variational inference techniques for the Dirichlet process still work with a finite approximation to this infinite mixture model, but instead of having to specify a priori how many components one wants to use, one just specifies the concentration parameter and an upper bound on the number of mixture components (this upper bound, assuming it is higher than the “true” number of components, affects only algorithmic complexity, not the actual number of components used).