C# is a strongly-typed language. Every variable and constant has a type, as does every expression that evaluates to a value. Every method signature specifies a type for each input parameter and for the return value. The .NET class library defines a set of built-in numeric types as well as more complex types that represent a wide variety of logical constructs, such as the file system, network connections, collections and arrays of objects, and dates. A typical C# program uses types from the class library as well as user-defined types that model the concepts that are specific to the program's problem domain.

The information stored in a type can include the following:

C and C++ developers, notice that in C#, bool is not convertible to int.

The compiler embeds the type information into the executable file as metadata. The common language runtime (CLR) uses that metadata at run time to further guarantee type safety when it allocates and reclaims memory.

When you declare a variable or constant in a program, you must either specify its type or use the varkeyword to let the compiler infer the type. The following example shows some variable declarations that use both built-in numeric types and complex user-defined types:

The types of method parameters and return values are specified in the method signature. The following signature shows a method that requires an int as an input argument and returns a string:

After a variable is declared, it cannot be re-declared with a new type, and it cannot be assigned a value that is not compatible with its declared type. For example, you cannot declare an int and then assign it a Boolean value of true. However, values can be converted to other types, for example when they are assigned to new variables or passed as method arguments. A type conversion that does not cause data loss is performed automatically by the compiler. A conversion that might cause data loss requires a cast in the source code.

C# provides a standard set of built-in numeric types to represent integers, floating point values, Boolean expressions, text characters, decimal values, and other types of data. There are also built-in string and object types. These are available for you to use in any C# program. For more information about the built-in types, see Reference Tables for Types.

You use the struct, class, interface, and enum constructs to create your own custom types. The .NET class library itself is a collection of custom types provided by Microsoft that you can use in your own applications. By default, the most frequently used types in the class library are available in any C# program. Others become available only when you explicitly add a project reference to the assembly in which they are defined. After the compiler has a reference to the assembly, you can declare variables (and constants) of the types declared in that assembly in source code. For more information, see .NET Class Library.

It is important to understand two fundamental points about the type system in .NET:

The following illustration shows the relationship between value types and reference types in the CTS. 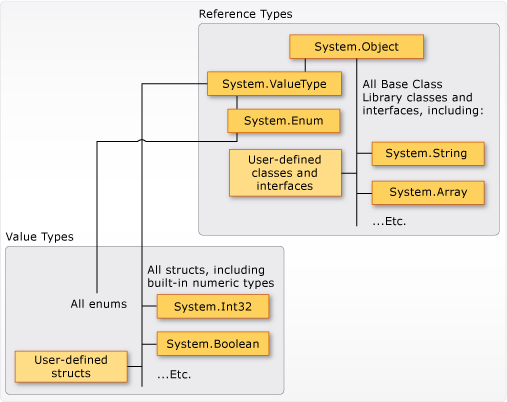 Value types and reference types in the CTS

You can see that the most commonly used types are all organized in the System namespace. However, the namespace in which a type is contained has no relation to whether it is a value type or reference type.

The built-in numeric types are structs, and they have properties and methods that you can access:

But you declare and assign values to them as if they were simple non-aggregate types:

Value types are sealed, which means, for example, that you cannot derive a type from System.Int32, and you cannot define a struct to inherit from any user-defined class or struct because a struct can only inherit from System.ValueType. However, a struct can implement one or more interfaces. You can cast a struct type to any interface type that it implements; this causes a boxing operation to wrap the struct inside a reference type object on the managed heap. Boxing operations occur when you pass a value type to a method that takes a System.Object or any interface type as an input parameter. For more information, see Boxing and Unboxing.You use the struct keyword to create your own custom value types. Typically, a struct is used as a container for a small set of related variables, as shown in the following example:

The other category of value types is enum. An enum defines a set of named integral constants. For example, the System.IO.FileMode enumeration in the .NET class library contains a set of named constant integers that specify how a file should be opened. It is defined as shown in the following example:

The System.IO.FileMode.Create constant has a value of 2. However, the name is much more meaningful for humans reading the source code, and for that reason it is better to use enumerations instead of constant literal numbers.

All enums inherit from System.Enum, which inherits from System.ValueType. All the rules that apply to structs also apply to enums.

A type that is defined as a class, delegate, array, or interface is a reference type. At run time, when you declare a variable of a reference type, the variable contains the value null until you explicitly create an object by using the new operator, or assign it an object that has been created elsewhere by using new, as shown in the following example:

An interface must be initialized together with a class object that implements it. If MyClass implements IMyInterface, you create an instance of IMyInterface as shown in the following example:

All arrays are reference types, even if their elements are value types. Arrays implicitly derive from the System.Array class, but you declare and use them with the simplified syntax that is provided by C#, as shown in the following example:

Reference types fully support inheritance. When you create a class, you can inherit from any other interface or class that is not defined as sealed, and other classes can inherit from your class and override your virtual methods. For more information about how to create your own classes, see Classes and Structs. For more information about inheritance and virtual methods, see Inheritance.

In C#, literal values receive a type from the compiler. You can specify how a numeric literal should be typed by appending a letter to the end of the number. For example, to specify that the value 4.56 should be treated as a float, append an "f" or "F" after the number: 4.56f. If no letter is appended, the compiler will infer a type for the literal. For more information about which types can be specified with letter suffixes, see the reference pages for individual types in Value Types.

Because literals are typed, and all types derive ultimately from System.Object, you can write and compile code such as the following:

A type can be declared with one or more type parameters that serve as a placeholder for the actual type (the concrete type) that client code will provide when it creates an instance of the type. Such types are called generic types. For example, the .NET type System.Collections.Generic.List<T> has one type parameter that by convention is given the name T. When you create an instance of the type, you specify the type of the objects that the list will contain, for example, string:

The use of the type parameter makes it possible to reuse the same class to hold any type of element, without having to convert each element to object. Generic collection classes are called strongly-typed collections because the compiler knows the specific type of the collection's elements and can raise an error at compile-time if, for example, you try to add an integer to the stringList object in the previous example.

As stated previously, you can implicitly type a local variable (but not class members) by using the varkeyword. The variable still receives a type at compile time, but the type is provided by the compiler.

In some cases, it is inconvenient to create a named type for simple sets of related values that you do not intend to store or pass outside method boundaries. You can create anonymous types for this purpose.

As stated previously, you can implicitly type a local variable (but not class members) by using the varkeyword. The variable still receives a type at compile time, but the type is provided by the compiler. For more information, see Implicitly Typed Local Variables.

In some cases, it is inconvenient to create a named type for simple sets of related values that you do not intend to store or pass outside method boundaries. You can create anonymous types for this purpose. For more information, see Anonymous Types.

Ordinary value types cannot have a value of null. However, you can create nullable value types by affixing a ? after the type. For example, int? is an int type that can also have the value null. In the CTS, nullable types are instances of the generic struct type System.Nullable<T>. Nullable types are especially useful when you are passing data to and from databases in which numeric values might be null. For more information, see Nullable Types.