Let's return to functions and study them more in-depth.

Our first topic will be recursion.

If you are not new to programming, then it is probably familiar and you could skip this chapter.

When a function solves a task, in the process it can call many other functions. A partial case of this is when a function calls itself. That's called recursion.

For something simple to start with -- let's write a function pow(x, n) that raises x to a natural power of n. In other words, multiplies x by itself n times.

There are two ways to implement it.

Please note how the recursive variant is fundamentally different.

When pow(x, n) is called, the execution splits into two branches:

We can also say that pow recursively calls itself till n == 1.

For example, to calculate pow(2, 4) the recursive variant does these steps:

So, the recursion reduces a function call to a simpler one, and then -- to even more simpler, and so on, until the result becomes obvious.

A recursive solution is usually shorter than an iterative one.

Here we can rewrite the same using the ternary ? operator instead of if to make pow(x, n) more terse and still very readable:

The maximal number of nested calls (including the first one) is called recursion depth. In our case, it will be exactly n.

The maximal recursion depth is limited by JavaScript engine. We can make sure about 10000, some engines allow more, but 100000 is probably out of limit for the majority of them. There are automatic optimizations that help alleviate this ("tail calls optimizations"), but they are not yet supported everywhere and work only in simple cases.

That limits the application of recursion, but it still remains very wide. There are many tasks where recursive way of thinking gives simpler code, easier to maintain.

Now let's examine how recursive calls work. For that we'll look under the hood of functions.

The information about a function run is stored in its execution context.

The execution context is an internal data structure that contains details about the execution of a function: where the control flow is now, the current variables, the value of this (we don't use it here) and few other internal details.

One function call has exactly one execution context associated with it.

When a function makes a nested call, the following happens:

In the beginning of the call pow(2, 3) the execution context will store variables: x = 2, n = 3, the execution flow is at line 1 of the function.

We can sketch it as:

That's when the function starts to execute. The condition n == 1 is false, so the flow continues into the second branch of if:

The variables are same, but the line changes, so the context is now:

Here we call the same function pow, but it absolutely doesn't matter. The process is the same for all functions:

Here's the context stack when we entered the subcall pow(2, 2):

The new current execution context is on top (and bold), and previous remembered contexts are below.

When we finish the subcall -- it is easy to resume the previous context, because it keeps both variables and the exact place of the code where it stopped. Here in the picture we use the word "line", but of course it's more precise.

The process repeats: a new subcall is made at line 5, now with arguments x=2, n=1.

A new execution context is created, the previous one is pushed on top of the stack:

There are 2 old contexts now and 1 currently running for pow(2, 1).

During the execution of pow(2, 1), unlike before, the condition n == 1 is truthy, so the first branch of if works:

There are no more nested calls, so the function finishes, returning 2.

As the function finishes, its execution context is not needed anymore, so it's removed from the memory. The previous one is restored off the top of the stack:

Then the previous context is restored:

The recursion depth in this case was: 3.

As we can see from the illustrations above, recursion depth equals the maximal number of context in the stack.

Note the memory requirements. Contexts take memory. In our case, raising to the power of n actually requires the memory for n contexts, for all lower values of n.

A loop-based algorithm is more memory-saving:

The iterative pow uses a single context changing i and result in the process. Its memory requirements are small, fixed and do not depend on n.

Any recursion can be rewritten as a loop. The loop variant usually can be made more effective.

...But sometimes the rewrite is non-trivial, especially when function uses different recursive subcalls depending on conditions and merges their results or when the branching is more intricate. And the optimization may be unneeded and totally not worth the efforts.

Recursion can give a shorter code, easier to understand and support. Optimizations are not required in every place, mostly we need a good code, that's why it's used.

Another great application of the recursion is a recursive traversal.

Imagine, we have a company. The staff structure can be presented as an object:

In other words, a company has departments.

Now let's say we want a function to get the sum of all salaries. How can we do that?

As we can see, when our function gets a department to sum, there are two possible cases:

The (1) is the base of recursion, the trivial case.

The (2) is the recursive step. A complex task is split into subtasks for smaller departments. They may in turn split again, but sooner or later the split will finish at (1).

The algorithm is probably even easier to read from the code:

The code is short and easy to understand (hopefully?). That's the power of recursion. It also works for any level of subdepartment nesting.

Here's the diagram of calls: 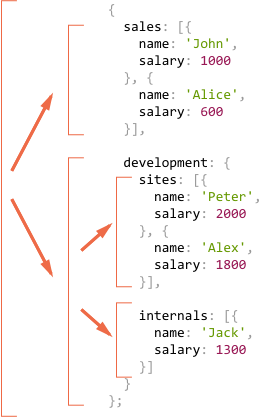 We can easily see the principle: for an object {...} subcalls are made, while arrays [...] are the "leaves" of the recursion tree, they give immediate result.

Note that the code uses smart features that we've covered before:

A recursive (recursively-defined) data structure is a structure that replicates itself in parts.

We've just seen it in the example of a company structure above.

A company department is:

For web-developers there are much better-known examples: HTML and XML documents.

In the HTML document, an HTML-tag may contain a list of:

That's once again a recursive definition.

For better understanding, we'll cover one more recursive structure named "Linked list" that might be a better alternative for arrays in some cases.

Imagine, we want to store an ordered list of objects.

The natural choice would be an array:

...But there's a problem with arrays. The "delete element" and "insert element" operations are expensive. For instance, arr.unshift(obj) operation has to renumber all elements to make room for a new obj, and if the array is big, it takes time. Same with arr.shift().

The only structural modifications that do not require mass-renumbering are those that operate with the end of array: arr.push/pop. So an array can be quite slow for big queues.

Alternatively, if we really need fast insertion/deletion, we can choose another data structure called a linked list.

The linked list element is recursively defined as an object with:

An alternative code for creation:

Here we can even more clearer see that there are multiple objects, each one has the value and next pointing to the neighbour. The list variable is the first object in the chain, so following next pointers from it we can reach any element.

The list can be easily split into multiple parts and later joined back:

And surely we can insert or remove items in any place.

For instance, to prepend a new value, we need to update the head of the list:

To remove a value from the middle, change next of the previous one:

We made list.next jump over 1 to value 2. The value 1 is now excluded from the chain. If it's not stored anywhere else, it will be automatically removed from the memory.

Unlike arrays, there's no mass-renumbering, we can easily rearrange elements.

Naturally, lists are not always better than arrays. Otherwise everyone would use only lists.

The main drawback is that we can't easily access an element by its number. In an array that's easy: arr[n] is a direct reference. But in the list we need to start from the first item and go next N times to get the Nth element.

...But we don't always need such operations. For instance, when we need a queue or even a deque -- the ordered structure that must allow very fast adding/removing elements from both ends.

Sometimes it's worth to add another variable named tail to track the last element of the list (and update it when adding/removing elements from the end). For large sets of elements the speed difference versus arrays is huge.

Any recursive function can be rewritten into an iterative one. And that's sometimes required to optimize stuff. But for many tasks a recursive solution is fast enough and easier to write and support.

Is a programming pattern that is useful in situations when a task can be naturally split into several tasks of the same kind, but simpler. Is a programming term that means a "self-calling" function. When a function calls itself, that's called a recursion step.

Can be put into any place of the script. They don't affect the execution because the engine simply ignores them.

Many operators are known to us from school. They are addition +, a multiplication *, a subtraction - and so on.

Sometimes we need to assign a variable depending on a condition.The so-called "ternary" or "question mark" operator lets us do that shorter and simpler.