Our code must be as clean and easy to read as possible.

That is actually the art of programming -- to take a complex task and code it in a way that is both correct and human-readable.

Here is a cheatsheet with some suggested rules (see below for more details): 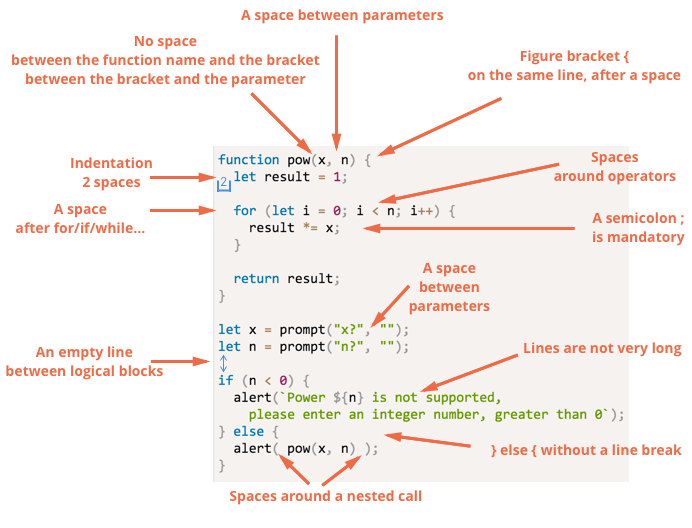 Now let's discuss the rules and reasons for them in detail.

Nothing is set in stone here. These are style preferences, not religious dogmas.

In most JavaScript projects curly braces are written in "Egyptian" style with the opening brace on the same line as the corresponding keyword -- not on a new line. There should also be a space before the opening bracket, like this:

A single-line construct is an important edge case. Should we use brackets at all? If yes, then where?

Here are the annotated variants so you can judge their readability for yourself: 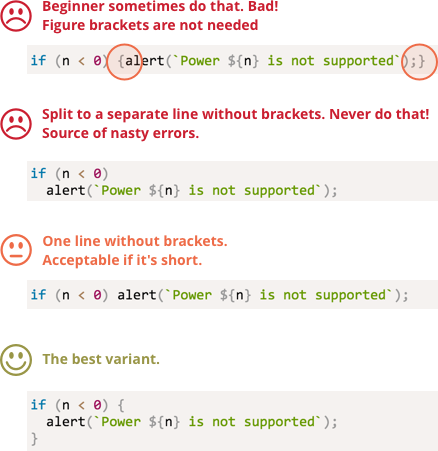 No one likes to read a long horizontal line of code. It's best practice to split them up and limit the length of your lines.

The maximum line length should be agreed upon at the team-level. It's usually 80 or 120 characters.

There are two types of indents:

A semicolon should be present after each statement, even if it could possibly be skipped.

There are languages where a semicolon is truly optional and it is rarely used. In JavaScript, though, there are cases where a line break is not interpreted as a semicolon, leaving the code vulnerable to errors.

As you become more mature as a programmer, you may choose a no-semicolon style like StandardJS. Until then, it's best to use semicolons to avoid possible pitfalls.

Try to avoid nesting code too many levels deep.

Sometimes it's a good idea to use the "continue" directive in a loop to avoid extra nesting.

For example, instead of adding a nested if conditional like this:

A similar thing can be done with if/else and return.

For example, two constructs below are identical.

The second one is more readable because the "edge case" of n < 0 is handled early on. Once the check is done we can move on to the "main" code flow without the need for additional nesting.

If you are writing several "helper" functions and the code that uses them, there are three ways to organize the functions.

Most of time, the second variant is preferred.

That's because when reading code, we first want to know what it does. If the code goes first, then it provides that information. Then, maybe we won't need to read the functions at all, especially if their names are descriptive of what they actually do.

A style guide contains general rules about "how to write" code, e.g. which quotes to use, how many spaces to indent, where to put line breaks, etc. A lot of minor things.

When all members of a team use the same style guide the code tends looks uniform, regardless of which team member wrote it.

Of course, a team can always write their own style guide. Most of the time though, there's no need to. There are many existing tried and true options to choose from, so adopting one of these is usually your best bet.

If you're a novice developer, start with the cheatsheet at the beginning of this chapter. Once you've mastered that you can browse other style guides to pick up common principles and decide which one you like best.

Linters are tools that can automatically check the style of your code and make suggestions for refactoring.

The great thing about them is that style-checking can also find some bugs, like typos in variable or function names. Because of this feature, installing a linter is recommended even if you don't want to stick to one particular "code style".

Here are the most well-known linting tools:

All of them can do the job. The author uses ESLint.

Most linters are integrated with many popular editors: just enable the plugin in the editor and configure the style.

For instance, for ESLint you should do the following:

Here's an example of an .eslintrc file:

Here the directive "extends" denotes that the configuration is based on the "eslint:recommended" set of settings. After that, we specify our own.

It is also possible to download style rule sets from the web and extend them instead. See http://eslint.org/docs/user-guide/getting-started for more details about installation.

Also certain IDEs have built-in linting, which is convenient but not as customizable as ESLint.

All syntax rules described in this chapter (and in the style guides referenced) aim to increase the readability of your code, but all of them are debatable.

When we think about writing "better" code, the questions we should ask are, "What makes the code more readable and easier to understand?" and "What can help us avoid errors?" These are the main things to keep in mind when choosing and debating code styles.

Reading popular style guides will allow you to keep up to date with the latest ideas about code style trends and best practices.

May be omitted in most cases when a line break exists.

For unique identifiers. Symbols are guaranteed to be unique. Even if we create many symbols with the same description, they are different values.

An integrated development environment is a software application that provides comprehensive facilities to computer programmers for software development.

A function, declared as a separate statement, in the main code flow. The syntax for creating a new function.

Our code must be as clean and easy to read as possible. N most JavaScript projects curly braces are written in "Egyptian" style with the opening brace on the same line as the corresponding keyword -- not on a new line. There should also be a space before the opening bracket. The maximum line length should be agreed upon at the team-level. It's usually 80 or 120 characters.