Memory management in JavaScript is performed automatically and invisibly to us. We create primitives, objects, functions... All that takes memory.

What happens when something is not needed any more? How does the JavaScript engine discover it and clean it up?

The main concept of memory management in JavaScript is reachability.

Simply put, "reachable" values are those that are accessible or usable somehow. They are guaranteed to be stored in memory.

There's a background process in the JavaScript engine that is called garbage collector. It monitors all objects and removes those that have become unreachable.

Here the arrow depicts an object reference. The global variable "user" references the object {name: "John"} (we'll call it John for brevity). The "name" property of John stores a primitive, so it's painted inside the object.

If the value of user is overwritten, the reference is lost: 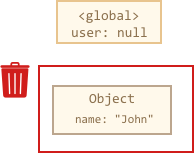 Now John becomes unreachable. There's no way to access it, no references to it. Garbage collector will junk the data and free the memory.

Now let's imagine we copied the reference from user to admin:

Now if we do the same:

...Then the object is still reachable via admin global variable, so it's in memory. If we overwrite admin too, then it can be removed.

Function marry "marries" two objects by giving them references to each other and returns a new object that contains them both. 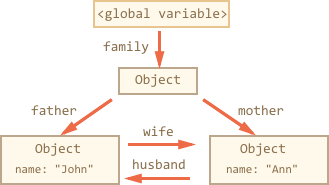 As of now, all objects are reachable. 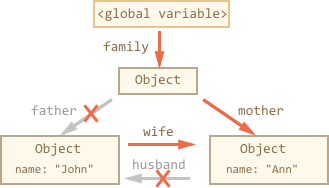 It's not enough to delete only one of these two references, because all objects would still be reachable.

But if we delete both, then we can see that John has no incoming reference any more: 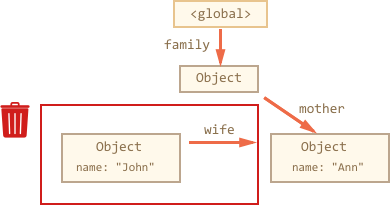 Outgoing references do not matter. Only incoming ones can make an object reachable. So, John is now unreachable and will be removed from the memory with all its data that also became unaccessible.

It is possible that the whole island of interlinked objects becomes unreachable and is removed from the memory.

The source object is the same as above. Then: 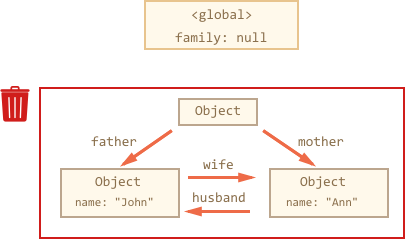 This example demonstrates how important the concept of reachability is.

It's obvious that John and Ann are still linked, both have incoming references. But that's not enough.

The former "family" object has been unlinked from the root, there's no reference to it any more, so the whole island becomes unreachable and will be removed.

For instance, let our object structure look like this: 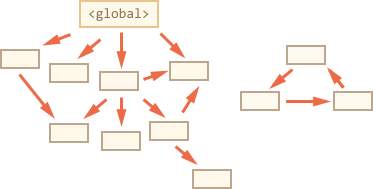 We can clearly see an "unreachable island" to the right side. Now let's see how "mark-and-sweep" garbage collector deals with it.

The first step marks the roots: 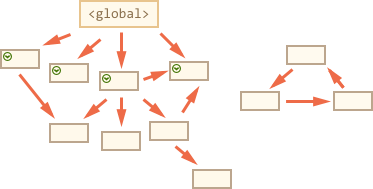 Then their references are marked: 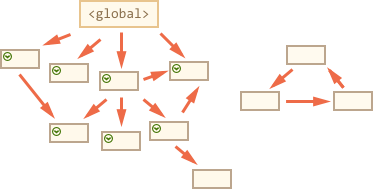 ...And their references, while possible: 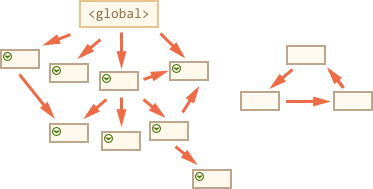 Now the objects that could not be visited in the process are considered unreachable and will be removed: 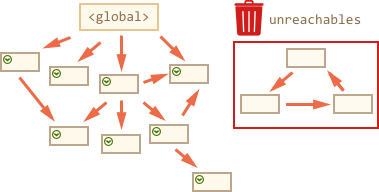 That's the concept of how garbage collection works.

JavaScript engines apply many optimizations to make it run faster and not affect the execution.

Some of the optimizations:

There are other optimizations and flavours of garbage collection algorithms. As much as I'd like to describe them here, I have to hold off, because different engines implement different tweaks and techniques. And, what's even more important, things change as engines develop, so going deeper "in advance", without a real need is probably not worth that. Unless, of course, it is a matter of pure interest, then there will be some links for you below.

The main things to know:

A general book "The Garbage Collection Handbook: The Art of Automatic Memory Management" (R. Jones et al) covers some of them.

If you are familiar with low-level programming, the more detailed information about V8 garbage collector is in the article A tour of V8: Garbage Collection.

V8 blog also publishes articles about changes in memory management from time to time. Naturally, to learn the garbage collection, you'd better prepare by learning about V8 internals in general and read the blog of Vyacheslav Egorov who worked as one of V8 engineers. I'm saying: "V8", because it is best covered with articles in the internet. For other engines, many approaches are similar, but garbage collection differs in many aspects.

In-depth knowledge of engines is good when you need low-level optimizations. It would be wise to plan that as the next step after you're familiar with the language.

There's a background process in the JavaScript engine. It monitors all objects and removes those that have become unreachable.