The "prototype" property is widely used by the core of JavaScript itself. All built-in constructor functions use it.

We'll see how it is for plain objects first, and then for more complex ones.

Where's the code that generates the string "[object Object]"? That's a built-in toString method, but where is it? The obj is empty!

...But the short notation obj = {} is the same as obj = new Object(), where Object -- is a built-in object constructor function. And that function has Object.prototype that references a huge object with toString and other functions.

When new Object() is called (or a literal object {...} is created), the [ [Prototype] ] of it is set to Object.prototype by the rule that we've discussed in the previous chapter:

Afterwards when obj.toString() is called -- the method is taken from Object.prototype.

Please note that there is no additional Prototype in the chain above Object.prototype:

Other built-in objects such as Array, Date, Function and others also keep methods in prototypes.

For instance, when we create an array [1, 2, 3], the default new Array() constructor is used internally. So the array data is written into the new object, and Array.prototype becomes its prototype and provides methods. That's very memory-efficient.

By specification, all built-in prototypes have Object.prototype on the top. Sometimes people say that "everything inherits from objects".

Here's the overall picture (for 3 built-ins to fit): 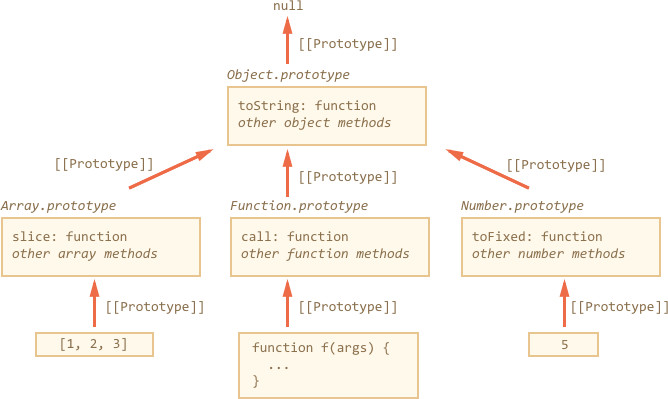 Some methods in prototypes may overlap, for instance, Array.prototype has its own toString that lists comma-delimited elements:

As we've seen before, Object.prototype has toString as well, but Array.prototype is closer in the chain, so the array variant is used. 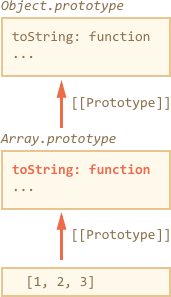 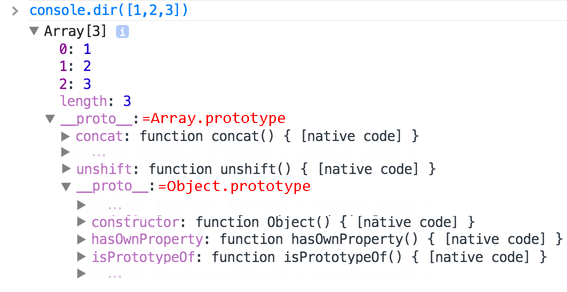 Other built-in objects also work the same way. Even functions. They are objects of a built-in Function constructor, and their methods: call/apply and others are taken from Function.prototype. Functions have their own toString too.

The most intricate thing happens with strings, numbers and booleans.

As we remember, they are not objects. But if we try to access their properties, then temporary wrapper objects are created using built-in constructors String, Number, Boolean, they provide the methods and disappear.

These objects are created invisibly to us and most engines optimize them out, but the specification describes it exactly this way. Methods of these objects also reside in prototypes, available as String.prototype, Number.prototype and Boolean.prototype.

Values null and undefined have no object wrappers

Special values null and undefined stand apart. They have no object wrappers, so methods and properties are not available for them. And there are no corresponding prototypes too.

Native prototypes can be modified. For instance, if we add a method to String.prototype,  it becomes available to all strings:

During the process of development we may have ideas which new built-in methods we'd like to have. And there may be a slight temptation to add them to native prototypes. But that is generally a bad idea.

Prototypes are global, so it's easy to get a conflict. If two libraries add a method String.prototype.show, then one of them overwrites the other one.

In modern programming, there is only one case when modifying native prototypes is approved. That's polyfills. In other words, if there's a method in JavaScript specification that is not yet supported by our JavaScript engine (or any of those that we want to support), then may implement it manually and populate the built-in prototype with it.

In the chapter info:call-apply-decorators#method-borrowing we talked about method borrowing:

Because join resides in Array.prototype, we can call it from there directly and rewrite it as:

That's more efficient, because it avoids the creation of an extra array object []. On the other hand, it is longer to write.

String conversion happens when we need the string form of a value.

The boolean data type has only two possible values: true and false.. Use this data type for simple flags that track true/false conditions.. This type is commonly used to store yes/no values: true means "yes, correct", and false means "no, incorrect".

Sometimes it's used to write shorter code, so we need to know it in order to understand what's going on.