How do you modify your app to make it react to user input? In this tutorial, you’ll add interactivity to an app that contains only non-interactive widgets. Specifically, you’ll modify an icon to make it tappable by creating a custom stateful widget that manages two stateless widgets.

Layout tutorial showed you how to create the layout for the following screenshot. 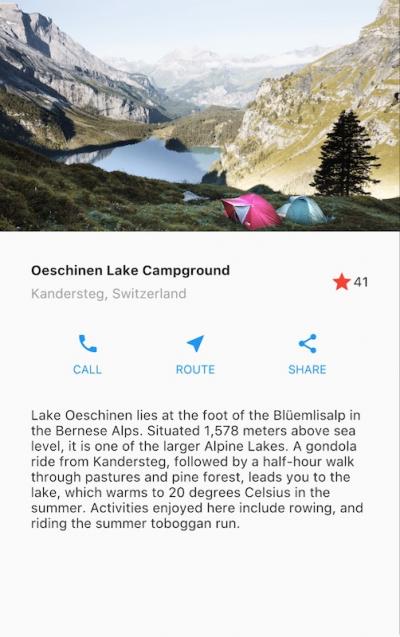 When the app first launches, the star is solid red, indicating that this lake has previously been favorited. The number next to the star indicates that 41 people have favorited this lake. After completing this tutorial, tapping the star removes its favorited status, replacing the solid star with an outline and decreasing the count. Tapping again favorites the lake, drawing a solid star and increasing the count.

To accomplish this, you’ll create a single custom widget that includes both the star and the count, which are themselves widgets. Tapping the star changes state for both widgets, so the same widget should manage both.

You can get right to touching the code in Step 2: Subclass StatefulWidget. If you want to try different ways of managing state, skip to Managing state.

A widget is either stateful or stateless. If a widget can change—when a user interacts with it, for example—it’s stateful.

A stateful widget is dynamic: for example, it can change its appearance in response to events triggered by user interactions or when it receives data. Checkbox, Radio, Slider, InkWell, Form, and TextField are examples of stateful widgets. Stateful widgets subclass StatefulWidget.

This section shows you how to build a stateful widget, called FavoriteWidget, for the lakes app. After setting up, your first step is choosing how state is managed for FavoriteWidget.

If you’ve already built the app in Layout tutorial (step 6), skip to the next section.

Once you have a connected and enabled device, or you’ve launched the iOS simulator (part of the Flutter install), you are good to go!

A widget’s state can be managed in several ways, but in our example the widget itself, FavoriteWidget, will manage its own state. In this example, toggling the star is an isolated action that doesn’t affect the parent widget or the rest of the UI, so the widget can handle its state internally.

Learn more about the separation of widget and state, and how state might be managed, in Managing state.

Note: Members or classes that start with an underscore (_) are private. For more information, see Libraries and visibility, a section in the Dart language tour.

The _FavoriteWidgetState class stores the mutable data that can change over the lifetime of the widget. When the app first launches, the UI displays a solid red star, indicating that the lake has “favorite” status, along with 41 likes. These values are stored in the _isFavorited and _favoriteCount fields:

Tip: Placing the Text in a SizedBox and setting its width prevents a discernible “jump” when the text changes between the values of 40 and 41 — a jump would otherwise occur because those values have different widths.

The _toggleFavorite() method, which is called when the IconButton is pressed, calls setState(). Calling setState() is critical, because this tells the framework that the widget’s state has changed and that the widget should be redrawn. The function argument to setState() toggles the UI between these two states:

Step 4: Plug the stateful widget into the widget tree

Add your custom stateful widget to the widget tree in the app’s build() method. First, locate the code that creates the Icon and Text, and delete it. In the same location, create the stateful widget:

That’s it! When you hot reload the app, the star icon should now respond to taps.

If you can’t get your code to run, look in your IDE for possible errors. Debugging Flutter Apps might help. If you still can’t find the problem, check your code against the interactive lakes example on GitHub.

If you still have questions, refer to any one of the developer community channels.

The rest of this page covers several ways a widget’s state can be managed, and lists other available interactive widgets.

Who manages the stateful widget’s state? The widget itself? The parent widget? Both? Another object? The answer is… it depends. There are several valid ways to make your widget interactive. You, as the widget designer, make the decision based on how you expect your widget to be used. Here are the most common ways to manage state:

How do you decide which approach to use? The following principles should help you decide:

If in doubt, start by managing state in the parent widget.

We’ll give examples of the different ways of managing state by creating three simple examples: TapboxA, TapboxB, and TapboxC. The examples all work similarly—each creates a container that, when tapped, toggles between a green or grey box. The _active boolean determines the color: green for active or grey for inactive.

These examples use GestureDetector to capture activity on the Container.

The widget manages its own state

Sometimes it makes the most sense for the widget to manage its state internally. For example, ListView automatically scrolls when its content exceeds the render box. Most developers using ListView don’t want to manage ListView’s scrolling behavior, so ListView itself manages its scroll offset.

Often it makes the most sense for the parent widget to manage the state and tell its child widget when to update. For example, IconButton allows you to treat an icon as a tappable button. IconButton is a stateless widget because we decided that the parent widget needs to know whether the button has been tapped, so it can take appropriate action.

In the following example, TapboxB exports its state to its parent through a callback. Because TapboxB doesn’t manage any state, it subclasses StatelessWidget.

Tip: When creating API, consider using the @required annotation for any parameters that your code relies on. To use @required, import the foundation library (which re-exports Dart’s meta.dart library):

In the TapboxC example, on tap down, a dark green border appears around the box. On tap up, the border disappears and the box’s color changes. TapboxC exports its _active state to its parent but manages its _highlight state internally. This example has two State objects, _ParentWidgetState and _TapboxCState.

An alternate implementation might have exported the highlight state to the parent while keeping the active state internal, but if you asked someone to use that tap box, they’d probably complain that it doesn’t make much sense. The developer cares whether the box is active. The developer probably doesn’t care how the highlighting is managed, and prefers that the tap box handles those details.

Flutter offers a variety of buttons and similar interactive widgets. Most of these widgets implement the Material Design guidelines, which define a set of components with an opinionated UI.

If you prefer, you can use GestureDetector to build interactivity into any custom widget. You can find examples of GestureDetector in Managing state, and in the Flutter Gallery.

When you need interactivity, it’s easiest to use one of the prefabricated widgets. Here’s a partial list:

The following resources might help when adding interactivity to your app.

have a State object that stores state data and carries it over across tree rebuilds, so it’s not lost.. a widget changes outside of the build method (because of runtime user interactions, for example). A widget can change—when a user interacts with it. It can change its appearance in response to events triggered by user interactions or when it receives data.

a widget with no state attached. Are useful when the part of the user interface you are describing does not depend on anything other than the initial configuration information in the widget.. the widget never changes, once built. Widget never changes.

Is a widget class that allows you to customize its child widget. Use it when you want to add padding, margins, borders, or background color, to name some of its capabilities..

Represents a single focused thing the user can do.. In Android, you can override methods from the Activity to capture lifecycle methods for the activity itself, or register ActivityLifecycleCallbacks on the Application.. In Flutter, you have neither concept, but you can instead listen to lifecycle events by hooking into the WidgetsBinding observer and listening to the didChangeAppLifecycleState() change event..

In an Android ListView, you create an adapter and pass it into the ListView, which renders each row with what your adapter returns.. Due to Flutter’s immutable widget pattern, you pass a list of widgets to your ListView, and Flutter takes care of making sure that scrolling is fast and smooth.. In Android, the ListView has a method to find out which item was clicked, ‘onItemClickListener’..