UI Controls on the Embedded Platforms in JavaFX

UI Controls on the Embedded Platforms

This chapter describes the specific of using JavaFX UI controls in the embedded environments.

Although JavaFX UI controls do not include any additional public APIs to work in the embedded environments, significant implementation changes were made to enable developers using the desktop controls in their JavaFX applications for touch-enabled devices.

The JavaFX SDK introduces additional operational capabilities of UI controls for touch-enabled devices: gestures and touches. Gestures can be generated for both touchscreen and trackpad actions, but touches are delivered for touchscreen actions only. In the current release JavaFX SDK supports only a single-point touch and only swipe gestures.

See the chapter on working with events from touch-enabled devices in Handling Events for more information about handling gestures and touch events in JavaFX.

When the virtual keyboard appears, users can type a character by tapping the appropriate key. After that, character that is associated with the key is sent to the control. User can type alpha, numeric, and symbol characters. To switch between the keyboards, they need to use the ABC/!#123 key and the Shift key. To access less frequently used characters, users need to press the appropriate key for longer time and choose the target key from the pop-up menu, as shown in Figure 30-2.

Table 30-1 Navigation Within the Virtual Keyboard

When UI interface of your application requires typing email address, URL, or only numeric symbols, you can set one of the alternative keyboard layouts. This setting is defined for a particular text control as shown in Example 30-1.

Currently, the vkType property supports the following values: numeric, url, email, and text. The last one corresponds to the default layout.

Figure 30-3 shows the email layout of the keyboard. In addition to letters, number, and alternative symbols, the layout has "@" and ".com" (".org") keys that are particularly helpful for quick typing email addresses.

Description of "Figure 30-3 Email Layout of the Virtual Keyboard"

The URL layout of the virtual keyboard, shown in Figure 30-4, does not have the Space key. Instead, it provides capabilities to type in "www." and "http//".

Description of "Figure 30-4 URL Layout of the Virtual Keyboard"

In some UIs, users are supposed to enter only numbers. Figure 30-5 shows a simplified numeric layout of the virtual keyboard that implements this task. No Shift key, neither alternative symbols are available in this layout.

Description of "Figure 30-5 Numeric Layout of the Virtual Keyboard"

The embedded.css style sheet alters the appearance of the following controls:

A scroll pane on a mobile touch platform performs scrolling as a result of touch gestures targeted on scroll view content. Scroll bars are hidden when the user is not interacting with the scroll pane, even if the content is bigger than the scroll pane. Scroll bars appear automatically after the touch gestures are performed, but only as an indicator of content size and position, not as an active control that the user uses for scrolling. When scroll bars appear, they overlap visible content and do not shift it like on the desktop platform, as shown in Figure 30-6. 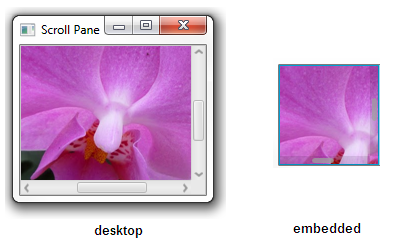 On touch-enabled platforms, TextArea, TextField, and PasswordField are implemented as rectangular spaces where users can enter a single line or multiple lines of text. Interaction with text controls is similar for all platforms. However, for embedded environments, the caret is used to facilitate navigation and text selection. The virtual keyboard is used to enter characters into text controls.

Figure 30-7 shows the TextFieldSample application running on a touch-enabled platform. The caret indicates the place where a user enters the symbols with the help of the virtual keyboard. See the code at TextFieldSample.java.

Figure 30-7 Appearance of the TextField Control 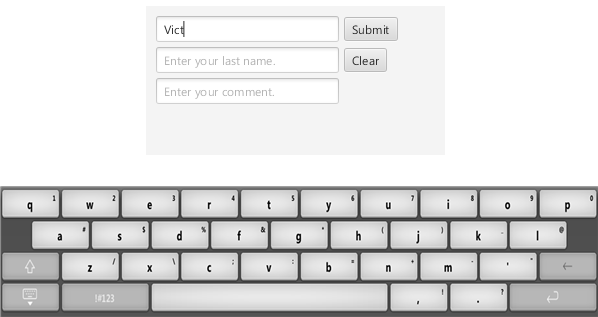 Description of "Figure 30-7 Appearance of the TextField Control"

The virtual keyboard is shown automatically when a text input field is in focus and it reacts when devices are rotated. The virtual keyboard appears when users need to enter text into TextField, TextArea, PasswordField, and other UI controls if their edit state is enabled. To hide the keyboard, users can tap a Hide button or tap outside the control.

The default appearance of the context menu is changed for the embedded environments to provide the horizontal layout of the menu items.

Figure 30-8 Appearance of a Context Menu 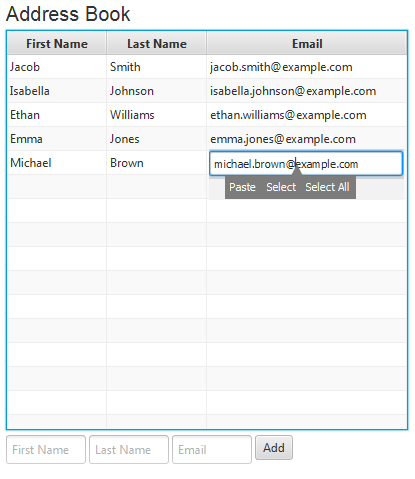 Description of "Figure 30-8 Appearance of a Context Menu"

If the text in the text control is selected, then the Cut, Copy, Paste, and Select All items are displayed, as shown in Figure 30-9. 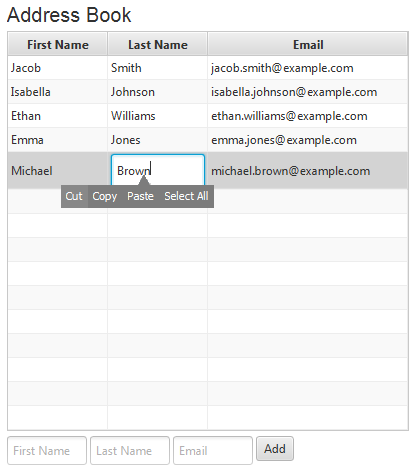 You can find another style sheet for the touch-enabled platforms in the JavaFX SDK. The embedded-qvga.css file defines the CSS styles for embedded devices that have QVGA screens. In particular, it specifies alternative padding for the TextField and TextArea controls.

In addition to the visual changes mentioned in the previous section, the behavior of UI controls is modified to accommodate single point touches and swipe gestures. Table 30-2 summarizes these changes.

All the actions mentioned in Table 30-2 are enabled when the application is run on the touch-enabled platform, and they do not require any additional code.

UI Controls Features That Are Not Available on Embedded Touch Platforms

The following list shows some features of UI controls that are currently disabled on embedded platforms:

There are several ways to get input from the user in Java. One of them is input by using Scanner object..

Statement can have a number of possible execution paths. Works with the byte, short, char, and int primitive data types, enumerated types, the String class, and a few special classes that wrap certain primitive types: Character, Byte, Short, and Integer.. The body of a switch statement is known as a switch block. A statement in the switch block can be labeled with one or more case or default labels. The switch statement evaluates its expression, then executes all statements that follow the matching case label..

A class that is derived from another class. Class declarations can include these components, in order: 1. Modifiers such as public, private, and a number of others that you will encounter later. 2. The class name, with the initial letter capitalized by convention. 3. The name of the class's parent (superclass), if any, preceded by the keyword extends. A class can only extend (subclass) one parent. 4. A comma-separated list of interfaces implemented by the class, if any, preceded by the keyword implements. A class can implement more than one interface. 5. The class body, surrounded by braces, {}..

An interface is a group of related methods with empty bodies. To implement this interface, the name of your class would change (to a particular brand of bicycle, for example, such as ACMEBicycle), and you'd use the implements keyword in the class declaration. Implementing an interface allows a class to become more formal about the behavior it promises to provide. Interfaces form a contract between the class and the outside world, and this contract is enforced at build time by the compiler. If your class claims to implement an interface, all methods defined by that interface must appear in its source code before the class will successfully compile.