For instance, moving along a complex path, with a timing function different from Bezier curves, or an animation on a canvas.

An animation can be implemented as a sequence of frames -- usually small changes to HTML/CSS properties.

For instance, changing style.left from 0px to 100px moves the element. And if we increase it in setInterval, changing by 2px with a tiny delay, like 50 times per second, then it looks smooth. That's the same principle as in the cinema: 24 or more frames per second is enough to make it look smooth.

More complete example of the animation:

If we run them separately, then even though each one has setInterval(..., 20), then the browser would have to repaint much more often than every 20ms.

That's because they have different starting time, so "every 20ms" differs between different animations. The intervals are not alignned. So we'll have several independent runs within 20ms.

In other words, this:

...Is lighter than three independent calls:

These several independent redraws should be grouped together, to make the redraw easier for the browser (and hence smoother for people).

There's one more thing to keep in mind. Sometimes when CPU is overloaded, or there are other reasons to redraw less often (like when the browser tab is hidden), so we really shouldn't run it every 20ms.

But how do we know about that in JavaScript? There's a specification Animation timing that provides the function requestAnimationFrame. It addresses all these issues and even more.

That schedules the callback function to run in the closest time when the browser wants to do animation.

If we do changes in elements in callback then they will be grouped together with other requestAnimationFrame callbacks and with CSS animations. So there will be one geometry recalculation and repaint instead of many.

The returned value requestId can be used to cancel the call:

The callback gets one argument -- the time passed from the beginning of the page load in microseconds. This time can also be obtained by calling performance.now().

Usually callback runs very soon, unless the CPU is overloaded or the laptop battery is almost discharged, or there's another reason.

The code below shows the time between first 10 runs for requestAnimationFrame. Usually it's 10-20ms:

Now we can make a more universal animation function based on requestAnimationFrame:

timing(timeFraction) : Timing function, like CSS-property transition-timing-function that gets the fraction of time that passed (0 at start, 1 at the end) and returns the animation completion (like y on the Bezier curve).

For instance, a linear function means that the animation goes on uniformly with the same speed: 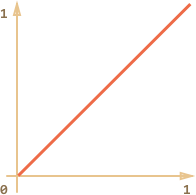 That's just like `transition-timing-function: linear`. There are more interesting variants shown below.

draw(progress) : The function that takes the animation completion state and draws it. The value progress=0 denotes the beginning animation state, and progress=1 -- the end state.

This is that function that actually draws out the animation.

It can move the element:

...Or do anything else, we can animate anything, in any way.

Let's animate the element width from 0 to 100% using our function.

The code for it:

Unlike CSS animation, we can make any timing function and any drawing function here. The timing function is not limited by Bezier curves. And draw can go beyond properties, create new elements for like fireworks animation or something.

We saw the simplest, linear timing function above.

Let's see more of them. We'll try movement animations with different timing functions to see how they work.

If we want to speed up the animation, we can use progress in the power n.

For instance, a parabolic curve: 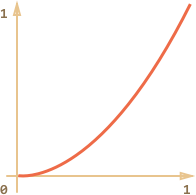 ...Or the cubic curve or event greater n. Increasing the power makes it speed up faster.

Here's the graph for progress in the power 5: 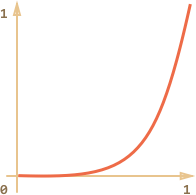 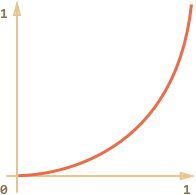 This function does the "bow shooting". First we "pull the bowstring", and then "shoot".

Unlike previous functions, it depends on an additional parameter x, the "elasticity coefficient". The distance of "bowstring pulling" is defined by it. 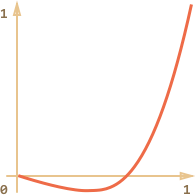 Imagine we are dropping a ball. It falls down, then bounces back a few times and stops.

The bounce function does the same, but in the reverse order: "bouncing" starts immediately. It uses few special coefficients for that:

One more "elastic" function that accepts an additional parameter x for the "initial range". 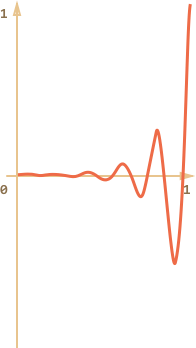 So we have a collection of timing functions. Their direct application is called "easeIn".

Sometimes we need to show the animation in the reverse order. That's done with the "easeOut" transform.

In the "easeOut" mode the timing function is put into a wrapper timingEaseOut:

In other words, we have a "transform" function makeEaseOut that takes a "regular" timing function and returns the wrapper around it:

For instance, we can take the bounce function described above and apply it:

Then the bounce will be not in the beginning, but at the end of the animation. Looks even better:

Here we can see how the transform changes the behavior of the function: 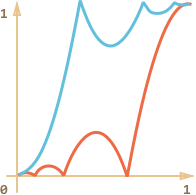 If there's an animation effect in the beginning, like bouncing -- it will be shown at the end.

In the graph above the regular bounce has the red color, and the easeOut bounce is blue.

We also can show the effect both in the beginning and the end of the animation. The transform is called "easeInOut".

Given the timing function, we calculate the animation state like this:

The "easeInOut" transform joins two graphs into one: easeIn (regular) for the first half of the animation and easeOut (reversed) -- for the second part.

The effect is clearly seen if we compare the graphs of easeIn, easeOut and easeInOut of the circ timing function: 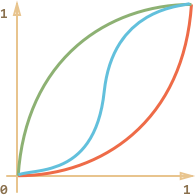 Instead of moving the element we can do something else. All we need is to write the write the proper draw.

For animations that CSS can't handle well, or those that need tight control, JavaScript can help. JavaScript animations should be implemented via requestAnimationFrame. That built-in method allows to setup a callback function to run when the browser will be preparing a repaint. Usually that's very soon, but the exact time depends on the browser.

When a page is in the background, there are no repaints at all, so the callback won't run: the animation will be suspended and won't consume resources. That's great.

Here's the helper animate function to setup most animations:

Surely we could improve it, add more bells and whistles, but JavaScript animations are not applied on a daily basis. They are used to do something interesting and non-standard. So you'd want to add the features that you need when you need them.

JavaScript animations can use any timing function. We covered a lot of examples and transformations to make them even more versatile. Unlike CSS, we are not limited to Bezier curves here.

The same is about draw: we can animate anything, not just CSS properties.

The idea is that we pass a function and expect it to be "called back" later if necessary. In our case, showOk becomes the callback for the "yes" answer, and showCancel for the "no" answer.

Can handle things that CSS can't.

Are used in computer graphics to draw shapes, for CSS animation and in many other places. Is defined by control points. There may be 2, 3, 4 or more. Can be described using a mathematical formula. Using a drawing process: De Casteljau's algorithm.

The method arr.reverse reverses the order of elements in arr.

Allow to smoothly (or not) animate changes of one or multiple CSS properties. Simple things done simply. Fast and lightweight for CPU.