CSS animations allow to do simple animations without JavaScript at all.

JavaScript can be used to control CSS animation and make it even better with a little of code.

The idea of CSS transitions is simple. We describe a property and how its changes should be animated. When the property changes, the browser paints the animation.

That is: all we need is to change the property. And the fluent transition is made by the browser.

For instance, the CSS below animates changes of background-color for 3 seconds:

Now if an element has .animated class, any change of background-color is animated during 3 seconds.

There are 4 properties to describe CSS transitions:

We'll cover them in a moment, for now let's note that the common transition property allows to declare them together in the order: property duration timing-function delay, and also animate multiple properties at once.

For instance, this button animates both color and font-size:

Now let's cover animation properties one by one.

In transition-property we write a list of property to animate, for instance: left, margin-left, height, color.

In transition-duration we can specify how long the animation should take. The time should be in CSS time format: in seconds s or milliseconds ms.

In the example above JavaScript adds the class .animate to the element -- and the animation starts:

We can also start it "from the middle", from the exact number, e.g. corresponding to the current second, using the negative transition-delay.

Here if you click the digit -- it starts the animation from the current second:

JavaScript does it by an extra line:

Timing function describes how the animation process is distributed along the time. Will it start slowly and then go fast or vise versa.

That's the most complicated property from the first sight. But it becomes very simple if we devote a bit time to it.

That property accepts two kinds of values: a Bezier curve or steps. Let's start from the curve, as it's used more often.

The timing function can be set as a Bezier curve with 4 control points that satisfies the conditions:

The timing function describes how fast the animation process goes in time.

The simplest variant is when the animation goes uniformly, with the same linear speed. That can be specified by the curve cubic-bezier(0, 0, 1, 1).

Here's how that curve looks:

...As we can see, it's just a straight line. As the time (x) passes, the completion (y) of the animation steadily goes from 0 to 1.

The train in the example below goes from left to right with the permanent speed (click it):

The CSS transition is based on that curve:

...And how can we show a train slowing down?

As we can see, the process starts fast: the curve soars up high, and then slower and slower.

Here's the timing function in action (click the train):

Other names are shorthands for the following cubic-bezier:

* -- by default, if there's no timing function, ease is used.

So we could use ease-out for our slowing down train:

But it looks a bit differently.

A Bezier curve can make the animation "jump out" of its range.

The control points on the curve can have any y coordinates: even negative or huge. Then the Bezier curve would also jump very low or high, making the animation go beyond its normal range.

In the example below the animation code is:

The property left should animate from 100px to 400px.

But if you click the train, you'll see that:

Why it happens -- pretty obvious if we look at the graph of the given Bezier curve: 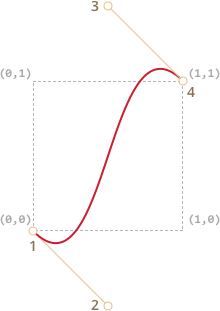 We moved the y coordinate of the 2nd point below zero, and for the 3rd point we made put it over 1, so the curve goes out of the "regular" quadrant. The y is out of the "standard" range 0..1.

As we know, y measures "the completion of the animation process". The value y = 0 corresponds to the starting property value and y = 1 -- the ending value. So values y<0 move the property lower than the starting left and y>1 -- over the final left.

That's a "soft" variant for sure. If we put y values like -99 and 99 then the train would jump out of the range much more.

But how to make the Bezier curve for a specific task? There are many tools. For instance, we can do it on the site http://cubic-bezier.com/.

Let's see that in an example with digits.

Here's a list of digits, without any animations, just as a source:

We'll make the digits appear in a discrete way by making the part of the list outside of the red "window" invisible and shifting the list to the left with each step.

There will be 9 steps, a step-move for each digit:

The first argument of steps(9, start) is the number of steps. The transform will be split into 9 parts (10% each). The time interval is automatically divided into 9 parts as well, so transition: 9s gives us 9 seconds for the whole animation – 1 second per digit.

The second argument is one of two words: start or end.

The start means that in the beginning of animation we need to do make the first step immediately.

We can observe that during the animation: when we click on the digit it changes to 1 (the first step) immediately, and then changes in the beginning of the next second.

The alternative value end would mean that the change should be applied not in the beginning, but at the end of each second.

Here's step(9, end) in action (note the pause between the first digit change):

There are also shorthand values:

These values are rarely used, because that's not really animation, but rather a single-step change.

When the CSS animation finishes the transitionend event triggers.

It is widely used to do an action after the animation is done. Also we can join animations.

For instance, the ship in the example below starts to swim there and back on click, each time farther and farther to the right:

The animation is initiated by the function go that re-runs each time when the transition finishes and flips the direction:

The event object for transitionend has few specific properties:

event.propertyName : The property that has finished animating. Can be good if we animate multiple properties simultaneously.

event.elapsedTime : The time (in seconds) that the animation took, without transition-delay.

We can join multiple simple animations together using the @keyframes CSS rule.

It specifies the "name" of the animation and rules: what, when and where to animate. Then using the animation property we attach the animation to the element and specify additional parameters for it.

Here's an example with explanations:

There are many articles about @keyframes and a detailed specification.

Probably you won't need @keyframes often, unless everything is in the constant move on your sites.

CSS animations allow to smoothly (or not) animate changes of one or multiple CSS properties.

They are good for most animation tasks. We're also able to use JavaScript for animations, the next chapter is devoted to that.

+ Simple things done simply.
+ Fast and lightweight for CPU.
- JavaScript animations are flexible. They can implement any animation logic, like an "explosion" of an element.
- Not just property changes. We can create new elements in JavaScript for purposes of animation.

The majority of animations can be implemented using CSS as described in this chapter. And transitionend event allows to run JavaScript after the animation, so it integrates fine with the code.

But in the next chapter we'll do some JavaScript animations to cover more complex cases.

Allow to smoothly (or not) animate changes of one or multiple CSS properties. Simple things done simply. Fast and lightweight for CPU.

Can handle things that CSS can't.

(unchanging) variable, one can use const instead of let.