JavaScript gives exceptional flexibility when dealing with functions. They can be passed around, used as objects, and now we'll see how to forward calls between them and decorate them.

Let's say we have a function slow(x) which is CPU-heavy, but its results are stable. In other words, for the same x it always returns the same result.

If the function is called often, we may want to cache (remember) the results for different x to avoid spending extra-time on recalculations.

But instead of adding that functionality into slow() we'll create a wrapper. As we'll see, there are many benefits of doing so.

In the code above cachingDecorator is a decorator: a special function that takes another function and alters its behavior.

By separating caching from the main function code we also keep the main code simpler.

Now let's get into details of how it works.

The result of cachingDecorator(func) is a "wrapper": function(x) that "wraps" the call of func(x) into caching logic: 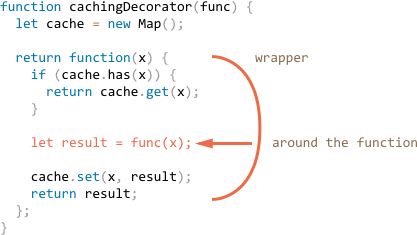 As we can see, the wrapper returns the result of func(x) "as is". From an outside code, the wrapped slow function still does the same. It just got a caching aspect added to its behavior.

To summarize, there are several benefits of using a separate cachingDecorator instead of altering the code of slow itself:

Using "func.call" for the context

The caching decorator mentioned above is not suited to work with object methods.

For instance, in the code below worker.slow() stops working after the decoration:

The error occurs in the line (*) that tries to access this.someMethod and fails. Can you see why?

The reason is that the wrapper calls the original function as func(x) in the line (**). And, when called like that, the function gets this = undefined.

We would observe a similar symptom if we tried to run:

So, the wrapper passes the call to the original method, but without the context this. Hence the error.

It runs func providing the first argument as this, and the next as the arguments.

To put it simply, these two calls do almost the same:

They both call func with arguments 1, 2 and 3. The only difference is that func.call also sets this to obj.

As an example, in the code below we call sayHi in the context of different objects: sayHi.call(user) runs sayHi providing this=user, and the next line sets this=admin:

And here we use call to call say with the given context and phrase:

In our case, we can use call in the wrapper to pass the context to the original function:

Now everything is fine.

To make it all clear, let's see more deeply how this is passed along:

Now let's make cachingDecorator even more universal. Till now it was working only with single-argument functions.

Now how to cache the multi-argument worker.slow method?

We have two tasks to solve here.

First is how to use both arguments min and max for the key in cache map. Previously, for a single argument x we could just cache.set(x, result) to save the result and cache.get(x) to retrieve it. But now we need to remember the result for a combination of arguments (min,max). The native Map takes single value only as the key.

There are many solutions possible:

For many practical applications, the 3rd variant is good enough, so we'll stick to it.

The second task to solve is how to pass many arguments to func. Currently, the wrapper function(x) assumes a single argument, and func.call(this, x) passes it.

Here we can use another built-in method func.apply.

It runs the func setting this=context and using an array-like object args as the list of arguments.

For instance, these two calls are almost the same:

For instance, here say is called with this=user and messageData as a list of arguments:

The only syntax difference between call and apply is that call expects a list of arguments, while apply takes an array-like object with them.

We already know the spread operator ... from the chapter info:rest-parameters-spread-operator that can pass an array (or any iterable) as a list of arguments. So if we use it with call, we can achieve almost the same as apply.

These two calls are almost equivalent:

If we look more closely, there's a minor difference between such uses of call and apply.

And if args is both iterable and array-like, like a real array, then we technically could use any of them, but apply will probably be faster, because it's a single operation. Most JavaScript engines internally optimize is better than a pair call + spread.

One of the most important uses of apply is passing the call to another function, like this:

That's called call forwarding. The wrapper passes everything it gets: the context this and arguments to anotherFunction and returns back its result.

When an external code calls such wrapper, it is indistinguishable from the call of the original function.

Now let's bake it all into the more powerful cachingDecorator:

Now the wrapper operates with any number of arguments.

There are two changes:

As of now, it works only on two arguments. It would be better if it could glue any number of args.

The natural solution would be to use arr.join method:

...Unfortunately, that won't work. Because we are calling hash(arguments) and arguments object is both iterable and array-like, but not a real array.

So calling join on it would fail, as we can see below:

Still, there's an easy way to use array join:

The trick is called method borrowing.

We take (borrow) a join method from a regular array [].join. And use [].join.call to run it in the context of arguments.

Why does it work?

That's because the internal algorithm of the native method arr.join(glue) is very simple.

Taken from the specification almost "as-is":

So, technically it takes this and joins this[0], this[1] ...etc together. It's intentionally written in a way that allows any array-like this (not a coincidence, many methods follow this practice). That's why it also works with this=arguments.

Decorator is a wrapper around a function that alters its behavior. The main job is still carried out by the function.

It is generally safe to replace a function or a method with a decorated one, except for one little thing. If the original function had properties on it, like func.calledCount or whatever, then the decorated one will not provide them. Because that is a wrapper. So one needs to be careful if one uses them. Some decorators provide their own properties.

Decorators can be seen as "features" or "aspects" that can be added to a function. We can add one or add many. And all this without changing its code!

To implement cachingDecorator, we studied methods:

The generic call forwarding is usually done with apply:

We also saw an example of method borrowing when we take a method from an object and call it in the context of another object. It is quite common to take array methods and apply them to arguments. The alternative is to use rest parameters object that is a real array.

There are many decorators there in the wild. Check how well you got them by solving the tasks of this chapter.

It calls the function for each element of the array and returns the array of results. Is a collection of keyed data items, just like an Object.

Many operators are known to us from school. They are addition +, a multiplication *, a subtraction - and so on.

To access the object, a method can use the this keyword. The value of this is the object "before dot", the one used to call the method.

Sometimes it's used to write shorter code, so we need to know it in order to understand what's going on.