In programming, we often want to take something and extend it.

For instance, we have a user object with its properties and methods, and want to make admin and guest as slightly modified variants of it. We'd like to reuse what we have in user, not copy/reimplement its methods, just build a new object on top of it.

Prototypal inheritance is a language feature that helps in that.

In JavaScript, objects have a special hidden property Prototype (as named in the specification), that is either null or references another object. That object is called "a prototype":

That Prototype has a "magical" meaning. When we want to read a property from object, and it's missing, JavaScript automatically takes it from the prototype. In programming, such thing is called "prototypal inheritance". Many cool language features and programming techniques are based on it.

The property Prototype is internal and hidden, but there are many ways to set it.

Please note that __proto__ is not the same as Prototype. That's a getter/setter for it. We'll talk about other ways of setting it later, but for now __proto__ will do just fine.

If we look for a property in rabbit, and it's missing, JavaScript automatically takes it from animal.

Here the line (*) sets animal to be a prototype of rabbit.

Then, when alert tries to read property rabbit.eats (**), it's not in rabbit, so JavaScript follows the Prototype reference and finds it in animal (look from the bottom up):

Here we can say that "animal is the prototype of rabbit" or "rabbit prototypally inherits from animal".

So if animal has a lot of useful properties and methods, then they become automatically available in rabbit. Such properties are called "inherited".

If we have a method in animal, it can be called on rabbit:

The method is automatically taken from the prototype, like this: 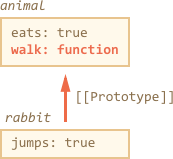 The prototype chain can be longer: 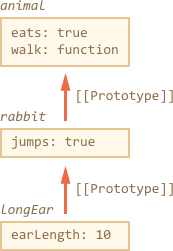 There are actually only two limitations:

Also it may be obvious, but still: there can be only one Prototype. An object may not inherit from two others.

The prototype is only used for reading properties.

For data properties (not getters/setters) write/delete operations work directly with the object.

In the example below, we assign its own walk method to rabbit:

From now on, rabbit.walk() call finds the method immediately in the object and executes it, without using the prototype: 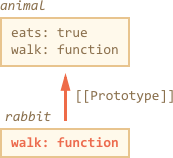 For getters/setters -- if we read/write a property, they are looked up in the prototype and invoked.

For instance, check out admin.fullName property in the code below:

The value of "this"

An interesting question may arise in the example above: what's the value of this inside set fullName(value)? Where the properties this.name and this.surname are written: user or admin?

The answer is simple: this is not affected by prototypes at all.

No matter where the method is found: in an object or its prototype. In a method call, this is always the object before the dot.

So, the setter actually uses admin as this, not user.

That is actually a super-important thing, because we may have a big object with many methods and inherit from it. Then we can run its methods on inherited objects and they will modify the state of these objects, not the big one.

For instance, here animal represents a "method storage", and rabbit makes use of it. 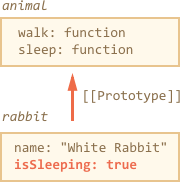 If we had other objects like bird, snake etc inheriting from animal, they would also gain access to methods of animal. But this in each method would be the corresponding object, evaluated at the call-time (before dot), not animal. So when we write data into this, it is stored into these objects.

As a result, methods are shared, but the object state is not.

To access the object, a method can use the this keyword. The value of this is the object "before dot", the one used to call the method.