In this chapter we cover additional methods to work with a prototype.

There are also other ways to get/set a prototype, besides those that we already know:

Object.create has an optional second argument: property descriptors. We can provide additional properties to the new object there, like this:

The descriptors are in the same format as described in the chapter info:property-descriptors.

We can use Object.create to perform an object cloning more powerful than copying properties in for..in:

This call makes a truly exact copy of obj, including all properties: enumerable and non-enumerable, data properties and setters/getters -- everything, and with the right Prototype.

If we count all the ways to manage Prototype, there's a lot! Many ways to do the same!

As of now we have all these ways at our disposal.

Technically, we can get/set Prototype at any time. But usually we only set it once at the object creation time, and then do not modify: rabbit inherits from animal, and that is not going to change. And JavaScript engines are highly optimized to that. Changing a prototype "on-the-fly" with Object.setPrototypeOf or obj.__proto__= is a very slow operation. But it is possible.

As we know, objects can be used as associative arrays to store key/value pairs.

...But if we try to store user-provided keys in it (for instance, a user-entered dictionary), we can see an interesting glitch: all keys work fine except "__proto__".

Check out the example:

Here if the user types in __proto__, the assignment is ignored!

That shouldn't surprise us. The __proto__ property is special: it must be either an object or null, a string can not become a prototype.

But we did not intend to implement such behavior, right? We want to store key/value pairs, and the key named "__proto__" was not properly saved. So that's a bug. Here the consequences are not terrible. But in other cases the prototype may indeed be changed, so the execution may go wrong in totally unexpected ways.

What's worst -- usually developers do not think about such possibility at all. That makes such bugs hard to notice and even turn them into vulnerabilities, especially when JavaScript is used on server-side.

Such thing happens only with __proto__. All other properties are "assignable" normally.

How to evade the problem?

First, we can just switch to using Map, then everything's fine.

But Object also can serve us well here, because language creators gave a thought to that problem long ago.

The __proto__ is not a property of an object, but an accessor property of Object.prototype:

So, if obj.__proto__ is read or assigned, the corresponding getter/setter is called from its prototype, and it gets/sets Prototype.

As it was said in the beginning: __proto__ is a way to access Prototype, it is not Prototype itself.

Now, if we want to use an object as an associative array, we can do it with a little trick:

Object.create(null) creates an empty object without a prototype (Prototype is null):

So, there is no inherited getter/setter for __proto__. Now it is processed as a regular data property, so the example above works right.

We can call such object "very plain" or "pure dictionary objects", because they are even simpler than regular plain object {...}.

A downside is that such objects lack any built-in object methods, e.g. toString:

Please note that most object-related methods are Object.something(...), like Object.keys(obj) -- they are not in the prototype, so they will keep working on such objects:

There are many ways to get keys/values from an object.

We already know these ones:

If we want symbolic properties:

If we want non-enumerable properties:

If we want all properties:

These methods are a bit different about which properties they return, but all of them operate on the object itself. Properties from the prototype are not listed.

The for..in loop is different: it loops over inherited properties too.

If we want to distinguish inherited properties, there's a built-in method obj.hasOwnProperty(key): it returns true if obj has its own (not inherited) property named key.

So we can filter out inherited properties (or do something else with them):

Here we have the following inheritance chain: rabbit, then animal, then Object.prototype (because animal is a literal object {...}, so it's by default), and then null above it: 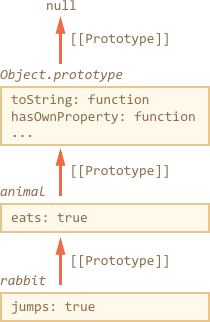 Note, there's one funny thing. Where is the method rabbit.hasOwnProperty coming from? Looking at the chain we can see that the method is provided by Object.prototype.hasOwnProperty. In other words, it's inherited.

...But why hasOwnProperty does not appear in for..in loop, if it lists all inherited properties? The answer is simple: it's not enumerable. Just like all other properties of Object.prototype. That's why they are not listed.

Here's a brief list of methods we discussed in this chapter -- as a recap:

We also made it clear that __proto__ is a getter/setter for Prototype and resides in Object.prototype, just as other methods.

We can create an object without a prototype by Object.create(null). Such objects are used as "pure dictionaries", they have no issues with "__proto__" as the key.

All methods that return object properties (like Object.keys and others) -- return "own" properties. If we want inherited ones, then we can use for..in.

String conversion happens when we need the string form of a value.

that an assignment = is also an operator. The assignment operator \"=\" returns a value.

It calls the function for each element of the array and returns the array of results. Is a collection of keyed data items, just like an Object.