Internally, React uses several clever techniques to minimize the number of costly DOM operations required to update the UI. For many applications, using React will lead to a fast user interface without doing much work to specifically optimize for performance. Nevertheless, there are several ways you can speed up your React application.

Use the Production Build

If you’re benchmarking or experiencing performance problems in your React apps, make sure you’re testing with the minified production build.

By default, React includes many helpful warnings. These warnings are very useful in development. However, they make React larger and slower so you should make sure to use the production version when you deploy the app.

If you aren’t sure whether your build process is set up correctly, you can check it by installing React Developer Tools for Chrome. If you visit a site with React in production mode, the icon will have a dark background:

If you visit a site with React in development mode, the icon will have a red background:

It is expected that you use the development mode when working on your app, and the production mode when deploying your app to the users.

You can find instructions for building your app for production below.

If your project is built with Create React App, run:

This will create a production build of your app in the build/ folder of your project.

Remember that this is only necessary before deploying to production. For normal development, use npm start.

We offer production-ready versions of React and React DOM as single files:

Remember that only React files ending with .production.min.js are suitable for production.

For the most efficient Brunch production build, install the uglify-js-brunch plugin:

Then, to create a production build, add the -p flag to the build command:

Remember that you only need to do this for production builds. You shouldn’t pass the -p flag or apply this plugin in development, because it will hide useful React warnings and make the builds much slower.

For the most efficient Browserify production build, install a few plugins:

To create a production build, make sure that you add these transforms (the order matters):

The package name is uglify-js, but the binary it provides is called uglifyjs.
This is not a typo.

Remember that you only need to do this for production builds. You shouldn’t apply these plugins in development because they will hide useful React warnings, and make the builds much slower.

For the most efficient Rollup production build, install a few plugins:

To create a production build, make sure that you add these plugins (the order matters):

For a complete setup example see this gist.

Remember that you only need to do this for production builds. You shouldn’t apply the uglify plugin or the replace plugin with 'production' value in development because they will hide useful React warnings, and make the builds much slower.

If you’re using Create React App, please follow the instructions above.
This section is only relevant if you configure webpack directly.

For the most efficient webpack production build, make sure to include these plugins in your production configuration:

You can learn more about this in webpack documentation.

Remember that you only need to do this for production builds. You shouldn’t apply UglifyJsPlugin or DefinePlugin with 'production' value in development because they will hide useful React warnings, and make the builds much slower.

In the development mode, you can visualize how components mount, update, and unmount, using the performance tools in supported browsers. For example:

To do this in Chrome:

For a more detailed walkthrough, check out this article by Ben Schwarz.

Note that the numbers are relative so components will render faster in production. Still, this should help you realize when unrelated UI gets updated by mistake, and how deep and how often your UI updates occur.

Currently Chrome, Edge, and IE are the only browsers supporting this feature, but we use the standard User Timing API so we expect more browsers to add support for it.

Profiling Components with the DevTools Profiler

react-dom 16.5+ and react-native 0.57+ provide enhanced profiling capabilities in DEV mode with the React DevTools Profiler. An overview of the Profiler can be found in the blog post “Introducing the React Profiler”. A video walkthrough of the profiler is also available on YouTube.

If you haven’t yet installed the React DevTools, you can find them here:

A production profiling bundle of react-dom is also available as react-dom/profiling. Read more about how to use this bundle at fb.me/react-profiling

If your application renders long lists of data (hundreds or thousands of rows), we recommended using a technique known as “windowing”. This technique only renders a small subset of your rows at any given time, and can dramatically reduce the time it takes to re-render the components as well as the number of DOM nodes created.

react-window and react-virtualized are popular windowing libraries. They provide several reusable components for displaying lists, grids, and tabular data. You can also create your own windowing component, like Twitter did, if you want something more tailored to your application’s specific use case.

React builds and maintains an internal representation of the rendered UI. It includes the React elements you return from your components. This representation lets React avoid creating DOM nodes and accessing existing ones beyond necessity, as that can be slower than operations on JavaScript objects. Sometimes it is referred to as a “virtual DOM”, but it works the same way on React Native.

When a component’s props or state change, React decides whether an actual DOM update is necessary by comparing the newly returned element with the previously rendered one. When they are not equal, React will update the DOM.

You can now visualize these re-renders of the virtual DOM with React DevTools:

In the developer console select the Highlight Updates option in the React tab:

Interact with your page and you should see colored borders momentarily appear around any components that have re-rendered. This lets you spot re-renders that were not necessary. You can learn more about this React DevTools feature from this blog post from Ben Edelstein.

Note that when we’re entering a second todo, the first todo also flashes on the screen on every keystroke. This means it is being re-rendered by React together with the input. This is sometimes called a “wasted” render. We know it is unnecessary because the first todo content has not changed, but React doesn’t know this.

Even though React only updates the changed DOM nodes, re-rendering still takes some time. In many cases it’s not a problem, but if the slowdown is noticeable, you can speed all of this up by overriding the lifecycle function shouldComponentUpdate, which is triggered before the re-rendering process starts. The default implementation of this function returns true, leaving React to perform the update:

If you know that in some situations your component doesn’t need to update, you can return false from shouldComponentUpdate instead, to skip the whole rendering process, including calling render() on this component and below. 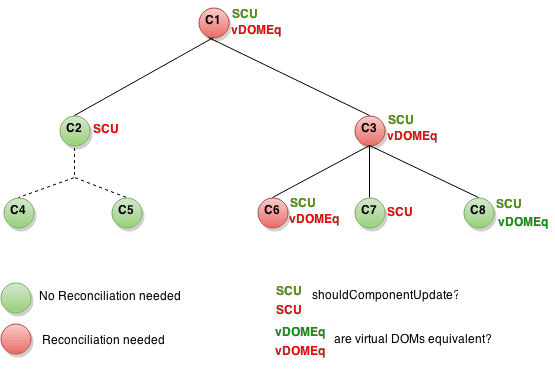 The last interesting case is C8. React had to render this component, but since the React elements it returned were equal to the previously rendered ones, it didn’t have to update the DOM.

Note that React only had to do DOM mutations for C6, which was inevitable. For C8, it bailed out by comparing the rendered React elements, and for C2’s subtree and C7, it didn’t even have to compare the elements as we bailed out on shouldComponentUpdate, and render was not called.

If the only way your component ever changes is when the props.color or the state.count variable changes, you could have shouldComponentUpdate check that:

In this code, shouldComponentUpdate is just checking if there is any change in props.color or state.count. If those values don’t change, the component doesn’t update. If your component got more complex, you could use a similar pattern of doing a “shallow comparison” between all the fields of props and state to determine if the component should update. This pattern is common enough that React provides a helper to use this logic - just inherit from React.PureComponent. So this code is a simpler way to achieve the same thing:

This can be a problem with more complex data structures. For example, let’s say you want a ListOfWords component to render a comma-separated list of words, with a parent WordAdder component that lets you click a button to add a word to the list. This code does not work correctly:

The problem is that PureComponent will do a simple comparison between the old and new values of this.props.words. Since this code mutates the words array in the handleClick method of WordAdder, the old and new values of this.props.words will compare as equal, even though the actual words in the array have changed. The ListOfWords will thus not update even though it has new words that should be rendered.

The Power Of Not Mutating Data

The simplest way to avoid this problem is to avoid mutating values that you are using as props or state. For example, the handleClick method above could be rewritten using concat as:

ES6 supports a spread syntax for arrays which can make this easier. If you’re using Create React App, this syntax is available by default.

You can also rewrite code that mutates objects to avoid mutation, in a similar way. For example, let’s say we have an object named colormap and we want to write a function that changes colormap.right to be 'blue'. We could write:

To write this without mutating the original object, we can use Object.assign method:

updateColorMap now returns a new object, rather than mutating the old one. Object.assign is in ES6 and requires a polyfill.

There is a JavaScript proposal to add object spread properties to make it easier to update objects without mutation as well:

If you’re using Create React App, both Object.assign and the object spread syntax are available by default.

Immutable.js is another way to solve this problem. It provides immutable, persistent collections that work via structural sharing:

Immutability makes tracking changes cheap. A change will always result in a new object so we only need to check if the reference to the object has changed. For example, in this regular JavaScript code:

Although y was edited, since it’s a reference to the same object as x, this comparison returns true. You can write similar code with immutable.js:

Two other libraries that can help use immutable data are seamless-immutable and immutability-helper.

Is a JavaScript library for building user interfaces

Object argument with data that is passed to the component

Is similar to props, but it is private and fully controlled by the component. Mutable state is typically kept in the state property of components, and only updated with setState()..

They accept arbitrary inputs (called “props”) and return React elements describing what should appear on the screen..