Flutter apps can include both code and assets (sometimes called resources). An asset is a file that is bundled and deployed with your app, and is accessible at runtime. Common types of assets include static data (for example, JSON files), configuration files, icons, and images (JPEG, WebP, GIF, animated WebP/GIF, PNG, BMP, and WBMP).

Flutter uses the pubspec.yaml file, located at the root of your project, to identify assets required by an app.

Here is an example:

To include all assets under a directory, specify the directory name with the / character at the end:

The assets subsection of the flutter section specifies files that should be included with the app. Each asset is identified by an explicit path (relative to the pubspec.yaml file) where the asset file is located. The order in which the assets are declared does not matter. The actual directory used (assets in this case) does not matter.

During a build, Flutter places assets into a special archive called the asset bundle, which apps can read from at runtime.

The build process supports the notion of asset variants: different versions of an asset that might be displayed in different contexts. When an asset’s path is specified in the assets section of pubspec.yaml, the build process looks for any files with the same name in adjacent subdirectories. Such files are then included in the asset bundle along with the specified asset.

For example, if you have the following files in your application directory:

And your pubspec.yaml file contains the following:

If, on the other hand, the graphics directory is specified:

Flutter uses asset variants when choosing resolution-appropriate images. In the future, this mechanism might be extended to include variants for different locales or regions, reading directions, and so on.

Your app can access its assets through an AssetBundle object.

The two main methods on an asset bundle allow you to load a string/text asset (loadString()) or an image/binary asset (load()) out of the bundle, given a logical key. The logical key maps to the path to the asset specified in the pubspec.yaml file at build time.

Each Flutter app has a rootBundle object for easy access to the main asset bundle. It is possible to load assets directly using the rootBundle global static from package:flutter/services.dart.

However, it’s recommended to obtain the AssetBundle for the current BuildContext using DefaultAssetBundle. Rather than the default asset bundle that was built with the app, this approach enables a parent widget to substitute a different AssetBundle at run time, which can be useful for localization or testing scenarios.

Typically, you’ll use DefaultAssetBundle.of() to indirectly load an asset, for example a JSON file, from the app’s runtime rootBundle.

Outside of a Widget context, or when a handle to an AssetBundle is not available, you can use rootBundle to directly load such assets. For example:

AssetImage understands how to map a logical requested asset onto one that most closely matches the current device pixel ratio. In order for this mapping to work, assets should be arranged according to a particular directory structure:

Where M and N are numeric identifiers that correspond to the nominal resolution of the images contained within. In other words, they specify the device pixel ratio that the images are intended for.

The main asset is assumed to correspond to a resolution of 1.0. For example, consider the following asset layout for an image named my_icon.png:

If the width and height of the rendered image are not specified on the Image widget, the nominal resolution is used to scale the asset so that it occupies the same amount of screen space as the main asset would have, just with a higher resolution. That is, if .../my_icon.png is 72px by 72px, then .../3.0x/my_icon.png should be 216px by 216px; but they both render into 72px by 72px (in logical pixels) if width and height are not specified.

Each entry in the asset section of the pubspec.yaml should correspond to a real file, with the exception of the main asset entry. If the main asset entry does not correspond to a real file, then the asset with the lowest resolution is used as the fallback for devices with device pixel ratios below that resolution. The entry should still be included in the pubspec.yaml manifest, however.

To load an image, use the AssetImage class in a widget’s build method.

For example, your app can load the background image from the asset declarations above:

Anything using the default asset bundle inherits resolution awareness when loading images. (If you work with some of the lower level classes, like ImageStream or ImageCache, you’ll also notice parameters related to scale.)

To load an image from a package dependency, the package argument must be provided to AssetImage.

For instance, suppose your application depends on a package called my_icons, which has the following directory structure:

To load the image, use:

Assets used by the package itself should also be fetched using the package argument as above.

A package can also choose to have assets in its lib/ folder that are not specified in its pubspec.yaml file. In this case, for those images to be bundled, the application has to specify which ones to include in its pubspec.yaml. For instance, a package named fancy_backgrounds could have the following files:

To include, say, the first image, the pubspec.yaml of the application should specify it in the assets section:

The lib/ is implied, so it should not be included in the asset path.

Sharing assets with the underlying platform

Flutter assets are readily available to platform code via AssetManager on Android and NSBundle on iOS.

On Android the assets are available via the AssetManager API. The lookup key used in, for instance openFd, is obtained from lookupKeyForAsset on PluginRegistry.Registrar or getLookupKeyForAsset on FlutterView. PluginRegistry.Registrar is available when developing a plugin while FlutterView would be the choice when developing an app including a platform view.

As an example, suppose you have specified the following in your pubspec.yaml

This reflects the following structure in your Flutter app.

To access icons/heart.png from your Java plugin code, do the following:

As an example, suppose you have the Flutter setting from above.

To access icons/heart.png from your Objective-C plugin code you would do the following:

For a more complete example, see the implementation of the Flutter video_player plugin.

The plugin ios_platform_images on pub.dev wraps up this logic in a convenient category. It allows writing:

When implementing Flutter as Add-to-app, you might have images hosted in iOS which you want to use in Flutter. For accomplishing that there is a plugin available on pub.dev called ios_platform_images.

There are other occasions to work with assets in the platform projects directly. Below are two common cases where assets are used before the Flutter framework is loaded and running.

In your Flutter project’s root directory, navigate to .../android/app/src/main/res. The various bitmap resource folders such as mipmap-hdpi already contain placeholder images named ic_launcher.png. Replace them with your desired assets respecting the recommended icon size per screen density as indicated by the Android Developer Guide.

Note: If you rename the .png files, you must also update the corresponding name in your AndroidManifest.xml’s <application> tag’s android:icon attribute.

In your Flutter project’s root directory, navigate to .../ios/Runner. The Assets.xcassets/AppIcon.appiconset directory already contains placeholder images. Replace them with the appropriately sized images as indicated by their filename as dictated by the Apple Human Interface Guidelines. Keep the original file names. 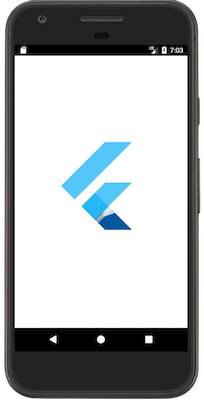 Flutter also uses native platform mechanisms to draw transitional launch screens to your Flutter app while the Flutter framework loads. This launch screen persists until Flutter renders the first frame of your application.

Note: This implies that if you don’t call [runApp()][] in the main() function of your app (or more specifically, if you don’t call window.render() in response to window.onDrawFrame), the launch screen persists forever.

To add a “splash screen” to your Flutter application, navigate to .../android/app/src/main. In res/drawable/launch_background.xml, use this layer list drawable XML to customize the look of your launch screen. The existing template provides an example of adding an image to the middle of a white splash screen in commented code. You can uncomment it or use other drawables to achieve the intended effect.

For more details, see Adding a splash screen and launch screen to an Android app.

To add an image to the center of your “splash screen”, navigate to .../ios/Runner. In Assets.xcassets/LaunchImage.imageset, drop in images named LaunchImage.png, LaunchImage@2x.png, LaunchImage@3x.png. If you use different filenames, update the Contents.json file in the same directory.

You can also fully customize your launch screen storyboard in Xcode by opening .../ios/Runner.xcworkspace. Navigate to Runner/Runner in the Project Navigator and drop in images by opening Assets.xcassets or do any customization using the Interface Builder in LaunchScreen.storyboard.

Take a picture using the camera

Is a file that is bundled and deployed with your app, and is accessible at runtime